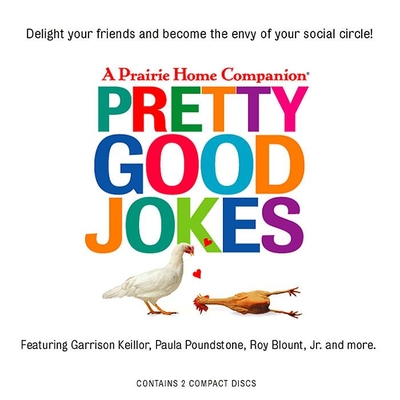 By Garrison Keillor, Paula Poundstone (Performed by)
$24.95
Available at Warehouse

Fulfilling the flood of requests from enthused listeners, Pretty Good Jokes combines all the jokes from A Prairie Home Companion's first four joke shows (1996-1999). It is an entertaining mix of knock-knocks, one-liners, North Dakota, religious, animal, bar, and light bulb jokes, those famous "yo mama" insults and much more. This live recording features guests Roy Blount, Jr. and Paula Poundstone. Pretty Good Jokes is for A Prairie Home Companion fans and all fans unaffected good humor.

Paula Poundstone is a popular panelist on NPR’s weekly comedy quiz program Wait Wait . . . Don’t Tell Me!. She tours regularly, performing standup throughout the country. Poundstone was the first woman ever to share the stage with the President as host at the White House Correspondents' Dinner. She has had numerous HBO specials, starred in her own series on HBO and ABC, is included in Comedy Central’s list of Top 100 Comics of All Time, and has won an American Comedy Award. The National Spokesperson for the ALA’s United for Libraries Volunteer Network, she is also the author of There’s Nothing in This Book That I Meant to Say.