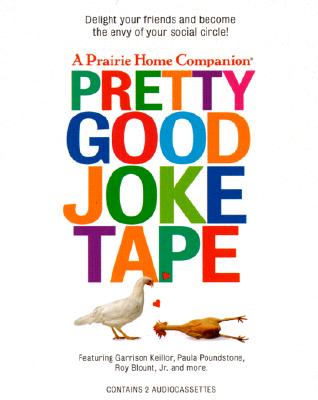 By Garrison Keillor, Paula Poundstone (Performed by)
Email or call for price
Out of Print

Fulfilling the flood of requests from enthused listeners, Pretty Good Jokes combines all the jokes from A Prairie Home Companion's first four joke shows (1996-1999). It is an entertaining mix of knock-knocks, one-liners, North Dakota, religious, animal, bar, and light bulb jokes, those famous "yo mama" insults and much more. This live recording features guests Roy Blount, Jr. and Paula Poundstone. Pretty Good Jokes is for A Prairie Home Companion fans and all fans unaffected good humor.

GARRISON KEILLOR is America’s favorite storyteller. For more than 35 years, as the host of A Prairie Home Companion, he has captivated millions of listeners with his weekly News from Lake Wobegon monologues. A Prairie Home Companion is heard on hundreds of public radio stations, as well as America One, the Armed Forces Networks, Sirius Satellite Radio, and via a live audio webcast.

PAULA POUNDSTONE has been a stand-up comic for nearly 25 years. Her long list of successes includes HBO specials, an Emmy Award, two Cable ACE Awards, and an America Comedy Award for Best Female Stand-Up. She lives in Los Angeles, California.