Lady in Red: An Intimate Portrait of Nancy Reagan (Hardcover) 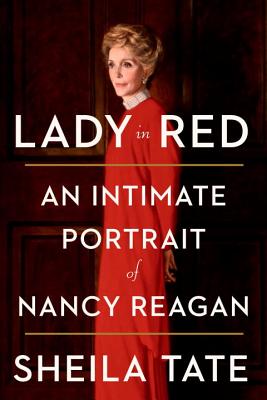 Lady in Red is the long-awaited collection of behind-the-scenes stories and iconic images of one of the most influential First Lady in modern history -- Nancy Reagan. Lovingly compiled by long-time close confidante and aide, Sheila Tate, the book provides a rare and much-anticipated look into the personal life of the president's wife, from her daily routines and travels as First Lady to her friendships and deep influence in the Reagan White House.

Lady in Red depicts a nuanced portrait of this graceful yet strong woman who felt it was her mission to restore a sense of grandeur, mystique, and excitement to the presidency, showcasing the various roles that Mrs. Reagan played during her years in the White House, that of Wife, Mother, Protector, Host, Diplomat, and Advisor, among others.

The book also features twenty-four pages of gorgeous color photographs, including "Nancy's Album," a collection of Mrs. Reagan's favorite photographs, which she entrusted to Sheila to share with the world after she and her beloved Ronnie had passed.

SHEILA TATE served as press secretary to First Lady Nancy Reagan from 1981 to 1985. After leaving the White House staff, she co-founded the Washington D.C. public relations firm Powell Tate. Sheila served as press secretary to George H. W. Bush during his successful campaign for the presidency in 1988, and for his transition. Sheila remained in close touch with Nancy Reagan after the Reagans returned to California, speaking with her often until Mrs. Reagan's passing in 2016.