Lost in the Jungle: Secrets of an Overworld Survivor, #1 (Paperback) 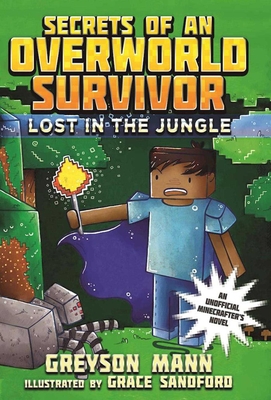 By Greyson Mann, Grace Sandford (Illustrator)
$4.99
On Our Shelves Now

Boys and girls, take a trip deep into the world of Minecraft you love!

Will has spent his whole life in the shadow of his older brother, Seth. Sure, his brother’s a master builder who’s known throughout the entire Overworld, but Will knows he could make his own mark in Minecraft if anyone would give him the chance to prove himself.

So when Will gets the opportunity to go on his first solo adventure, he jumps at the opportunity. Seth urges Will to stay at home where he’ll be safe, or at least take some time to prepare for the journey, but Will knows he has the courage and strength to face whatever strange biomes or hostile mobs the Overworld has in store for him.

Will’s quest gets off to a great start when he meets Mina, a fellow adventurer, and they decide to look for excitement together. But when the two get separated and night starts to fall, Will realizes he’s lost. With spiders and creepers spawning all around him and no shelter in sight, can Will survive the night all on his own?

Beginning readers—and gamers—will be on the edge of their seats in this thrilling first installment in the Secrets of an Overworld Survivor chapter book series!

Greyson Mann is the author of the Creeper Diaries series and the Secrets of an Overworld Survivor series from Sky Pony Press. He kept diaries like Gerald's when he was a middle schooler. He kept right on writing through high school and college and now creates books for kids from his home in Madison, Wisconsin. Greyson enjoys playing Minecraft with his nephew, sometimes writes bad rap songs, and hangs out with his three sisters, whom he now adores.

Grace Sandford is an illustrator and designer whose clients include Palmer Hargreaves, Stew magazine, Green Android Ltd., and Paper and Apparel. Her books include the two previous books in the Secrets of an Overworld Survivor series; Tough Cookie, written by Kate Louise; and The Egg, which she both wrote and illustrated. She currently resides in Norwich, England.