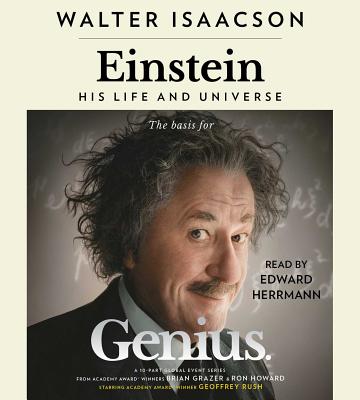 Winner of the 2008 Audie Award for Biography/Memoir

The definitive, internationally bestselling biography of Albert Einstein. Now the basis of Genius, the ten-part National Geographic series on the life of Albert Einstein, starring the Oscar, Emmy, and Tony Award–winning actor Geoffrey Rush as Einstein.

How did his mind work? What made him a genius? Isaacson’s biography shows how Einstein’s scientific imagination sprang from the rebellious nature of his personality. His fascinating story is a testament to the connection between creativity and freedom. Einstein explores how an imaginative, impertinent patent clerk—a struggling father in a difficult marriage who couldn’t get a teaching job or a doctorate—became the mind reader of the creator of the cosmos, the locksmith of the mysteries of the atom, and the universe. His success came from questioning conventional wisdom and marveling at mysteries that struck others as mundane. This led him to embrace a morality and politics based on respect for free minds, free spirits, and free individuals.

Einstein, the classic #1 New York Times bestseller, is a brilliantly acclaimed account of the most influential scientist of the twentieth century, “an illuminating delight” (The New York Times). The basis for the National Geographic series Genius, by the author of The Innovators, Steve Jobs, and Benjamin Franklin, this is the definitive biography of Albert Einstein.

Walter Isaacson, a professor of history at Tulane, has been CEO of the Aspen Institute, chair of CNN, and editor of Time. He is the author of Leonardo da Vinci; The Innovators; Steve Jobs; Einstein: His Life and Universe; Benjamin Franklin: An American Life; and Kissinger: A Biography, and the coauthor of The Wise Men: Six Friends and the World They Made. Visit him at Isaacson.Tulane.edu.

Edward Herrmann's films include Nixon, The Purple Rose of Cairo, Annie, and The Aviator. On television's Gilmore Girls he starred as the patriarch, Richard Gilmore. He has also appeared on The Good Wife, Law & Order, 30 Rock, Grey's Anatomy, and Oz. He earned an Emmy Award for The Practice, and remains well-known for his Emmy-nominated portrayals of FDR in Eleanor and Franklin and Eleanor and Franklin: The White House Years. On Broadway, he won a Tony Award for his performance in Mrs. Warren's Profession.