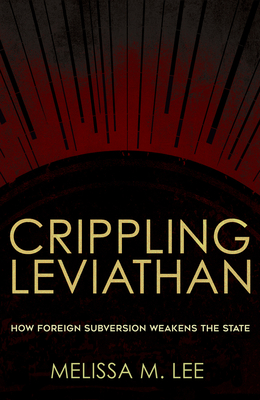 Policymakers worry that ungoverned spaces pose dangers to security and development. Why do such spaces exist beyond the authority of the state? Earlier scholarship--which addressed this question with a list of domestic failures--overlooked the crucial role that international politics play. In this shrewd book, Melissa M. Lee argues that foreign subversion undermines state authority and promotes ungoverned space. Enemy governments empower insurgents to destabilize the state and create ungoverned territory. This kind of foreign subversion is a powerful instrument of modern statecraft. But though subversion is less visible and less costly than conventional force, it has insidious effects on governance in the target state.

To demonstrate the harmful consequences of foreign subversion for state authority, Crippling Leviathan marshals a wealth of evidence and presents in-depth studies of Russia's relations with the post-Soviet states, Malaysian subversion of the Philippines in the 1970s, and Thai subversion of Vietnamese-occupied Cambodia in the 1980s. The evidence presented by Lee is persuasive: foreign subversion weakens the state.

She challenges the conventional wisdom on statebuilding, which has long held that conflict promotes the development of strong, territorially consolidated states. Lee argues instead that conflictual international politics prevents state development and degrades state authority. In addition, Crippling Leviathan illuminates the use of subversion as an underappreciated and important feature of modern statecraft. Rather than resort to war, states resort to subversion. Policymakers interested in ameliorating the consequences of ungoverned space must recognize the international roots that sustain weak statehood.