Hey Mom: Stories for My Mother, But You Can Read Them Too (Paperback) 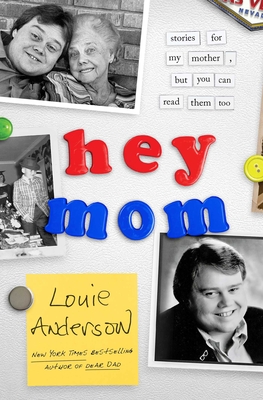 By Louie Anderson
Email or call for price
Subject to Availabilty

“I started out writing these letters to my mom, but a few friends said I should write a book. I said ‘okay’ because next to ‘we’ll see,’ ‘okay’ is as non-committal as you can get. But somehow, I stuck with it. I hope you like it. I hope that after you read it, you’ll write or call your own mom—and dad, sister, brother, cousin, nephew. Or have lunch with them. Or breakfast. It doesn’t have to be lunch. But do it now. Don’t wait like I did.” —Louie

Louie Anderson has channeled his beloved mom, Ora Zella Anderson, in his stand-up routine for decades, but she died before seeing him reach his greatest heights, culminating in his breakout TV role as Christine Baskets, the mesmerizing character she inspired. Hey Mom is Louie’s way of catching her up on the triumphs, disappointments, and continuing challenges in life. Full of heartache, but also great hope, and of course—given Louie’s inimitable comedic voice—laugh-out-loud stories and his trademark observations on life’s many absurdities, Hey Mom shows a poignant side of Louie you may not know, and proves that he is one of the most nuanced and wide-ranging comics working today.

Louie Anderson is an actor and stand-up comedian, named by Comedy Central as “One of the 100 Greatest Stand-Up Comedians of All Time.” From 1994 to 2001, he created and produced the animated Emmy Award–winning Fox series Life with Louie, based on his own childhood. He won his most recent Emmy for his costarring role on Zach Galifianakis’s Baskets. Hey Mom is his fourth book.

“Hey Mom is an articulate, insightful and openly emotional series of letters that will resonate with those recovering from traumatic childhoods and with fans of Anderson's 1989 book, Dear Dad.”
— Shelf Awareness