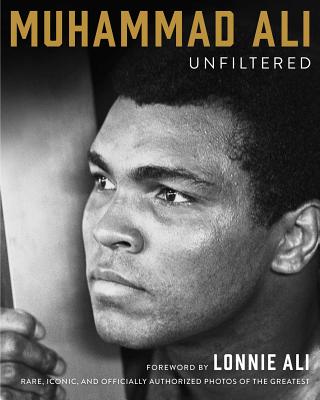 The fighter, the activist, the man, the icon. An officially authorized collection, Muhammad Ali Unfiltered is Jeter Publishing’s intimate look at one of the most inspiring figures of our age. Celebrate the life of Muhammad Ali in these 200-plus pages of images, quotes, and tributes to the Greatest of All Time.

Millions of words have been said about Muhammad Ali—at least half of those by the fighter himself. Brought to the world stage through boxing, he transcended the sport with his quick feet, quick fists, and even quicker mouth. Not content to be idolized as a celebrity, he reached out to encounter the world as it was, always striving to make it a better place for everyone.

A foreword and a eulogy by the legend’s widow, Lonnie Ali, sit alongside Muhammad Ali’s wit, wisdom, and inimitably photogenic self to paint a rounded portrait of a man who strove to get the most out of life and live well. Including his extemporaneous “Getting Ready to Meet God” speech and featuring more than 200 rare and iconic photos, many rare or exclusive, Muhammad Ali Unfiltered brings you the Greatest of All Time like you’ve never seen him before.

Muhammad Ali's core principles of confidence, conviction, dedication, giving, respect, and spirituality guided him and made him one of the most beloved symbols of peace and well-being in America and the world.

First known for boxing, and later for his conscientious stance on the Vietnam War draft, Ali focused his awareness of the needs of his fellow citizens and those in the developing world to direct his good work. In addition to challenging racial and religious preconceptions at home, he served as a symbol of hope and a catalyst for constructive international dialogue, delivered sorely-needed medical supplies to an embargoed Cuba, provided more than 22 million meals to the world’s hungry, and helped secure the release of fifteen U.S. hostages from Iraq during the first Gulf War. The United Nations named him a Messenger of Peace, and he was awarded the Presidential Medal of Freedom, as well as Amnesty International’s Lifetime Achievement Award. In September 2012, he was the recipient of the prestigious National Constitution Center Liberty Medal.

Among his many projects, Muhammad cofounded the Muhammad Ali Center with his wife Lonnie, and contributed substantially to the awareness and research efforts regarding Parkinson’s disease.

Visit the Muhammad Ali Center in Louisville, Kentucky, or online at AliCenter.org.

"Muhammad Ali is perhaps the world's most recognized sports figure... His ideals in and out of the ring [are] a standard to live by."
— Matt Lauer, The Today Show