All God's Dangers: The Life of Nate Shaw (MP3 CD) 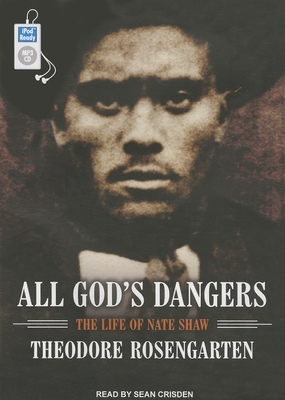 By Theodore Rosengarten, Sean Crisden (Narrated by)
$39.99
Email or call for price.

Nate Shaw's father was born into slavery. Nate was born into a bondage that was only a little gentler. At the age of nine, he was picking cotton and plowing behind a mule. At the age of forty-seven, he faced down a crowd of white deputies who had come to confiscate a neighbor's livestock. His defiance cost him twelve years in prison. This triumphant autobiography, All God's Dangers, assembled from the eighty-four-year-old Shaw's oral reminiscences, is the plainspoken story of an over average man who witnessed momentous changes in the lives of Southern people, black and white, and whose unassuming courage helped bring those changes about.

Theodore Rosengarten is an American historian. Along with "All God s Dangers," which won a National Book Award for contemporary affairs, Rosengarten has authored "Tombee: Portrait of a Cotton Planter." He is a professor of history at the College of Charleston, and currently resides in South Carolina.

Sean Crisden is a multitalented actor and an "AudioFile" Earphones Award-winning narrator who has recorded audiobooks in almost every genre, from science fiction to romance. He has also voiced characters in numerous video games and appeared in many commercials and films, including "The Last Airbender.""