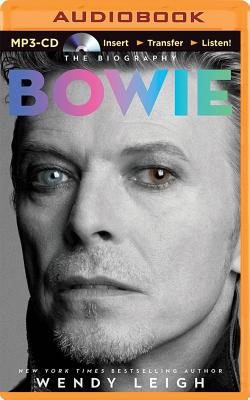 By Simon Vance (Read by), Wendy Leigh
Email or call for price
Subject to Availabilty

Discover the man behind the myth in this new biography of one of the most pioneering and influential performers of our time--David Bowie.

David Bowie--the iconic superstar of rock, fashion, art, design, and the quintessential sexual liberator--is a living legend. However, for the past five decades, he has managed to retain his Hollywood star mystique. Now, New York Times bestselling author Wendy Leigh reveals the real man behind the mythology. Through scores of interviews with Bowie's lovers (both male and female), his girlfriends, business associates, groupies, and band members, Leigh, who grew up just a mile from where Bowie was born and went to school, has written an intimate biography of rock's greatest enigma.

In an unexpurgated exploration of Bowie's kaleidoscopic personal life, she reveals his star-crossed inheritance--his mother was once an acolyte of the British Fascist party; his father, the PR genius who masterminded his early career--in a dramatic contrast to those family members grappling with mental illness, fears that would haunt Bowie for most of his life.

Above all, there is Bowie's hard-won rise to fame and fortune, his astounding creativity, his courage as a performer, and his shape-shifting style, coupled with a ruthless ambition that caused him to submit to the casting couch on his way to the top. In the process, Leigh tells of Bowie's strong bond with John Lennon, his love/hate relationship with Mick Jagger, his male sexual partners, and his women, as disparate as Elizabeth Taylor, Susan Sarandon, Tina Turner, Marianne Faithful, Nina Simone, and most notable, his marriage to Iman, which has lasted for the past quarter of a century.

This biography is a once-in-a-lifetime look at the iconic superstar who changed the world.