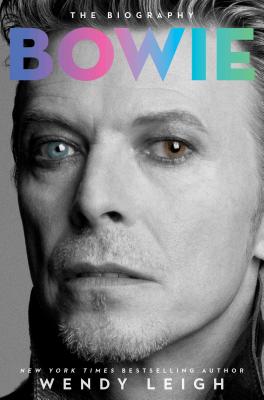 By Wendy Leigh
Email or call for price
Hard to Find

Ziggy Stardust, Aladdin Sane, the Thin White Duke. Gender Bender. Rebel. Songwriter. Fashion Icon. Rock God. One of the most influential creative artists of his generation, David Bowie morphed from one glittering incarnation to the next over the course of five decades—an enduring superstar who remained endlessly enigmatic and always ahead of his time. Discover the man behind the myth in this intimate and in-depth biography—featuring a full-color sixteen-page photo insert.

David Bowie passed away after an eighteen-month battle with cancer on January 10, 2016. Few knew of his illness, and Bowie flawlessly orchestrated his last goodbye with the release of his final (and some say best) album, Blackstar, featuring the haunting song “Lazarus,” and its accompanying video, a farewell message to his millions of fans. Throughout his iconic career that included such hits as “Let’s Dance,” “Space Oddity,” “Heroes,” “Modern Love,” and “Life on Mars,” Bowie managed to retain his Hollywood star mystique.

Through in-depth interviews with those who knew him best, New York Times bestselling author Wendy Leigh reveals the man behind Bowie’s myriad images—up to and including his role as stay-at-home dad, happily monogamous in his quarter-of-a-century-plus marriage to supermodel Iman. In this “sizzling” (Radar Online) new biography, Leigh brings fresh insights to Bowie’s battles with addiction; his insatiable sex life—from self-avowed gay to bisexual to resolutely heterosexual—and countless conquests; his childhood in a working-class London neighborhood and the troubling family influences that fueled his relentless pursuit of success; and much more. This exploration of an artist beloved by so many reveals the man at the center of the mythos.

Wendy Leigh is the New York Times bestselling author of sixteen books, including Bowie, Prince Charming: The John F. Kennedy Jr. Story, and The Secret Letters of Marilyn Monroe & Jacqueline Kennedy, and the coauthor of Life with My Sister Madonna, Jeannie Out of the Bottle, and Shirley Jones.