Black and White: The Way I See It (Hardcover) 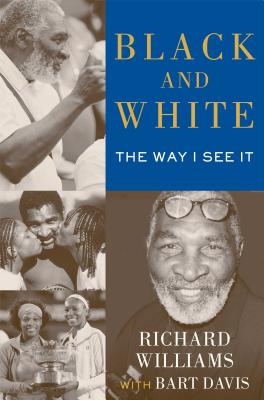 By Richard Williams, Bart Davis (With)
Email or call for price
Hard to Find

The fascinating, revealing, and in-depth memoir of Richard Williams, a self-made businessman, tennis coach, and father to two of the greatest athletes of all time—Venus and Serena Williams.

He’d set his mind to raise two of the greatest women champions in professional tennis well before they could even hold a racket. The father of Venus and Serena Williams had a grand plan for his daughters. The source of his vision, the method behind his execution, and the root of his indomitable spirit he held private. Until now. What he reveals about his success—his story of struggle, determination, hard work, and family—is told in the pages of this inspiring memoir, Black and White: The Way I See It.

Richard Williams, for the first time ever, shares stories about the poverty and violence of his early life in Shreveport, Louisiana, in the 1940s—a life that could have ended on the day he was born because of indifference, racism, and cruelty were it not for the strength of his mother and the kindness of a stranger. Williams’s mother was his hero, just as he became a hero to Venus and Serena, who express in the book the lessons he taught them and how much they love their much-criticized and even maligned father. His critics claimed that he was “in the way” of his daughters’ athletic success, that he was “destroying his daughters’ marketing and advertising abilities,” and even accused him of “abuse.”

Richard Williams describes a family life held together by the principles that matter most: courage, confidence, commitment, faith, and above all, love.

“When you’re younger, as a female, you flock to your father. When you get older, you’re closer to your mother. I still feel really, really close to my father. . . . We have a great relationship. There is an appreciation. There is a closeness because of what we’ve been through together, and a respect,” says Serena.

“Training started early for my kids, but it wasn’t only on the tennis courts. I used to take Venus and Serena to work with me so they could learn the importance of planning, responsibility, and a strong work ethic, even at their early age,” Richard Williams writes. The self-made man saw the value of education and had the discipline to practice what he learned. He went so far as to write a plan for his family’s future before his tennis champion daughters were ever born.

Richard Williams has walked a long, hard, exciting, and ultimately rewarding road for seventy years, fighting every hand raised against him while raising a loving family and two of the greatest tennis players who ever lived.

Richard Williams is an American tennis coach and the father of Venus and Serena Williams.

Bart Davis has written four nonfiction books, The Woman Who Can’t Forget, Closure, Shooting Stars, and Holy War on the Home Front. He is a graduate of the Bronx High School of Science and Stony Brook University and holds a BA in English and an MA in social work.

Richard Williams has long been widely regarded as an enigma. Now, in his own words he reveals himself as a proud—and sometimes dangerously stubborn—warrior with a keen, incisive mind. Part memoir and part how-to guide on raising children, this is a fascinating tale of a complex character who refused to give up or give in to the status quo.
— Nathan McCall, author of Makes Me Wanna Holler

A tennis coach’s up-by-the-bootstraps memoir about his life and the impact his upbringing had in shaping his tennis superstar daughters Venus and Serena Williams. The book was co-authored by Davis (The Woman Who Can't Forget, 2009, etc.).

The author grew up the son of a single mother and an absentee father with “a terrible reputation for living off women and having babies all over” his then-segregated hometown of Shreveport, La. His mother taught him the importance of remaining peaceful and tolerant in the face of discrimination. But Williams openly questioned the too-accepting attitudes he saw in the African-American community and became an angry, rebellious teenager who learned how to make a profit out of goods he stole from whites. Seeking to escape the violence and racism he saw around him, Williams traveled to Chicago. He continued to prosper but also saw that even successful blacks were resigned to the fact that they “could never have as much as white people.” His next destination was Southern California, where he finally found the opportunities he needed to develop his formidable skills as a businessman and entrepreneur. When Williams accidentally discovered how profitable tennis could be as a profession, he decided to not only learn the game, but also teach it to the unborn daughters he believed would one day be at “the forefront of a white-dominated game.” He read books, talked to experts, watched videos and played in the broken-down courts of South Central Los Angeles. Others scoffed at his plans, which included moving his family from Long Beach to the ghettos of Compton to toughen up the two daughters he eventually had. Williams had the last laugh when both girls went on to become two of the most winning and respected tennis players in the world. Inspiring and tough-minded, Williams’ book is above all a celebration of one man’s resilient, unorthodox spirit.

“At its core, this is a story about planning for greatness.”

“Tennis coach Richard Williams is a controversial figure in women’s tennis. I read his new book, Black and White: The Way I See It, on a plane ride to Vermont. I could not put the book down. I don’t play tennis and typically don’t follow it with the exception of Venus and Serena Williams. Raised in Compton, California, Venus and Serena Williams with the coaching of their father have dominated women’s tennis for over a decade. Between them, they have won 15 Wimbledon titles, won more Olympic gold medals than any other women in tennis, each been repeatedly named the No. 1 female player in the world and earned almost every major award in the sport. Behind their success stands Richard Williams, their father and tennis coach.

Through unorthodox methods and amid constant criticism, Richard Williams had a grand plan for his daughters. In this inspiring memoir, Black and White: The Way I See It, Williams, for the first time ever, shares stories about the poverty and violence of his early life in Shreveport, Louisiana, in the 1940s. Richard Williams used a unique parenting style as a coach and as a parent. He taught his girls how to think and he was not a super coach who acted like a tyrant. He would pull his girls from tournaments when he thought it was more important that they enjoy the childhood. At the end of the day, Richard Williams overcame major obstacles as a child, raised a loving family as an adult, and along the way, developed two of the greatest tennis players who ever lived.”
— Gary Johnson