Letters of Note: An Eclectic Collection of Correspondence Deserving of a Wider Audience (Historical Nonfiction Letters, Letters from Famous People, Book of Letters and Correspondance) (Hardcover) 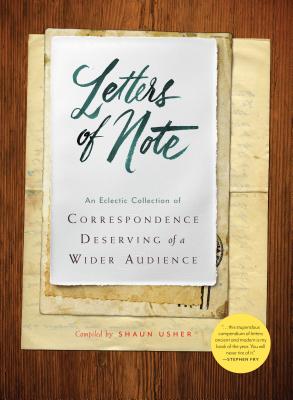 This spectacular collection of more than 125 letters offers a never-before-seen glimpse of the events and people of history—the brightest and best, the most notorious, and the endearingly everyday. Entries include a transcript of the letter; a short contextual introduction; and, in 100 cases, a captivating facsimile of the letter itself. The artfulness of Shaun Usher's eclectic arrangement creates a reading experience rich in discovery. Mordant, hilarious, poignant, enlightening—surprise rewards each turn of the page. Colorfully illustrated with photographs, portraits, and relevant artworks, this handsome hardcover is a visual treat too, making Letters of Note an utterly distinctive gift, and an instant classic.

"Someone should write a love letter to a new book called Letters of Note. It's a splendid collection of all kinds of correspondence through the ages: Elvis Presley fans writing to the president, children making suggestions to famous cartoonists, a scientist's poignant love letter to his late wife."
- A Way With Words

"Reading through them is addictive, like dipping into a bag of variously tempting assorted candies, knowing that the next one will always bring surprise and pleasure. "
-The New Yorker

"It's the kind of book you'll go back to again and again, and find something new every time. It's a celebration of what makes us human, and gathered together, they have a powerful effect. If nothing else, it will make you want to jot down a letter of your own."
- Yakima Herald

Starred Review " Based on the blog of the same name, this collection of letters is so handsome that it looks like a coffee-table book, but it's more than that. In it, Queen Elizabeth II sends a note to President Dwight ­Eisenhower reflecting on ­Mamie and Ike's visit to ­Balmoral Castle: she appends her recipe for scones. The chairman of the Whitehall Vigilance Committee receives a package with a note from Jack the Ripper accompanied by half a human kidney, pickled in wine: "I fried and ate it was very nise." Gandhi appeals to Hitler as the only one who can avert the impending war. Bank robber Clyde Barrow tells Henry Ford he only drives Fords. ­Francis Crick alerts his son about DNA. A wife writes to her samurai husband on the eve of battle (he died in the fighting, she committed suicide) and an ex-slave addresses his former master. This treasure trove of fascinating material includes more than 125 letters from both the famous and the unknown dating as far back as 1340 BCE, many reproduced in facsimile.A beautiful collection that should appeal to everyone. Start reading it and you're lost. "
- Library Journal

holiday Gift Guide Pick "Usher has been showcasing epistles on his website for years; now 125 of his favorites, written by the likes of Katherine Hepburn, Fidel Castro and Richard Feynman, are gathered in this incomparable compendium of human relationships and emotion."
-Time Out NY

Holiday Gift Guide Pick
"Shaun Usher's glorious selection of letters from writers, royalty, rock stars and ordinary citizens, makes you yearn to find a witty handwritten or typed missive in your mailbox. Drawn from the blog of the same name, this lovely volume combines photographs, transcriptions and commentary. "
-Newsday

"While a good portion of history happened out in the open, allowing it to be preserved in the history books for everyone to read for generations, still more happened in the private correspondence of people who mattered. In Letters of Note: An Eclectic Collection of Correspondence Deserving of a Wider Audience (brought to you by the creator of the blog by the same name) you'll read letters spanning across centuries, from influential political leaders, authors, actors, murderers, and more. Each one lends a unique insight into the major events of the time, whether they're wars, cultural shifts, key moments, or important discoveries. This epistolary compilation contains over 300 letters, detailing the personal thoughts of everyone from Jack the Ripper to Kurt Vonnegut."
-Uncrate

"While some might argue that the art of correspondence died with the advent of the internet, it was Letters of Note-a popular website sharing correspondence across history and spheres-that paved the way for the exceptional hardcover of the same name. The book's introduction aptly describes itself as "a museum of letters" that are as addictive as they are enlightening; featuring letters from Ernest Hemingway, Fidel Castro, Nick Cave, Elvis and more than a few world leaders.

London-based author Shaun Usher compiled the collection of over 125 letters over the course of four years and the subjects span both private and public theatrics. A letter from Elvis Presley to President Nixon is written in-flight on American Airlines stationary, in which Presley expresses his patriotism and requests to be made a Federal Agent, "just so long as it is kept very private." Each of the letters is accompanied with a contextual note from Usher that only serves to add to the fascination and potential rabbit hole of additional research readers might find themselves falling into.

From art to music, politics, history, civil rights and drawing on just about every human emotion, it's easy to get lost in the 342-page tome. Each letter tells its own stories and it is easy to find oneself interested in new subjects. Perhaps the book's greatest virtue (and that of correspondence itself) is its ability to inject individual humanity into historical events and time periods. One highlight is a letter from a free slave to his former master, kindly rejecting an offer of a job while inquiring about the family and describing his new life. These true stories-whether they're between household names or persons unknown-reflect the great importance of interpersonal communication and the beauty of long-form written conversation."
- Cool Hunting

"'Letters of Note' has been my favorite summer book, full of the kinds of letters I hope to find in my own mailbox, but rarely, these days, ever do."
-The Advocate

"It is a truly beautiful book."
-The Bookseller (UK)

"Every single epistle in Letters of Note is soul-stretching beyond measure."
-Brain Pickings

"An eloquent tribute to the lost art of letter writing."
GQ magazine (UK)

"...an anthology of Shaun Usher's wonderful blog of the same name. It's well worth picking up."
Quartz

"...a stupendous collection of memorable missives, often by famous people - and with facsimiles, each page is a marvel...Letters of Note is quite literally the most enjoyable volume it is possible to imagine."
-The Spectator (UK)