Medusa's Gaze and Vampire's Bite: The Science of Monsters (Hardcover) 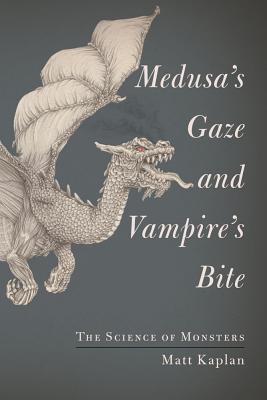 By Matt Kaplan
Email or call for price
Hard to Find

This eye-opening tour through history’s legendary monsters and the science and culture that spawned them, provides new insight into the creatures that have terrified us for centuries.

We all know “there’s no such thing as monsters,” but our imaginations tell us otherwise. From the mythical beasts of ancient Greece to the hormonal vampires of the Twilight saga, monsters have captivated us for millennia. Matt Kaplan, a noted science journalist and monster-myth enthusiast, employs an entertaining mix of cutting-edge research and a love of lore to explore the history behind these fantastical fictions and our hardwired obsession with things that go bump in the night.

Ranging across history, Medusa’s Gaze and Vampire’s Bite tackles the enduring questions that arise on the frontier between fantasy and reality. What caused ancient Minoans to create the tale of the Minotaur and its subterranean maze? Did dragons really exist? What inspired the creation of vampires and werewolves, and why are we so drawn to them?

With the eye of a journalist and the voice of a storyteller, Kaplan takes readers to the forefront of science, where our favorite figures of horror may find real-life validation. Does the legendary Kraken, a squid of epic proportions, really roam the deep? Are we close to making Jurassic Park a reality by replicating a dinosaur from fossilized DNA? As our fears evolve, so do our monsters, and Medusa’s Gaze and Vampire’s Bite charts the rise of the ultimate beasts, humans themselves.

Matt Kaplan is a science correspondent with The Economist. He has also contributed to National Geographic, New Scientist, Nature, and The New York Times. He is the author of the book The Science of Monsters. In 2014, Kaplan was awarded a Knight Science Journalism Fellowship which he used to study the sciences at MIT and folklore at Harvard.

“In this insightful guide to mythic monsters, Matt Kaplan not only tracks the likely ancient origins of terrifying beasts, but predicts how these nightmarish creatures are evolving today and might manifest themselves in our future.”—Adrienne Mayor, author of The First Fossil Hunters: Dinosaurs, Mammoths, and Myth in Greek and Roman Times

“Kaplan merges his incisive wit and clever pen into what can only be described as a delightfully seductive little monster.”—Eli Finkel, Professor of Psychology, Northwestern University

"A wonderful read for movie and history buffs that will leave you believing monsters are real!"—John Carls, Producer of Where the Wild Things Are