War Dogs: The True Story of How Three Stoners From Miami Beach Became the Most Unlikely Gunrunners in History (Paperback) 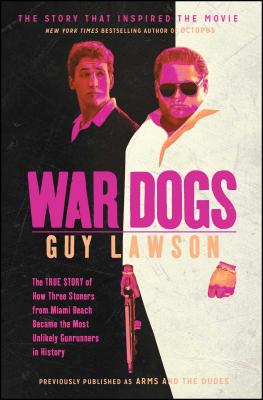 Soon to be a major motion picture from the director of The Hangover starring Jonah Hill, the page-turning, behind-closed-doors account of how three kids from Florida became big-time weapons traders for the government and how the Pentagon later turned on them.

In January of 2007, three young stoners from Miami Beach were put in charge of a $300 million Department of Defense contract to supply ammunition to the Afghanistan military. Instead of fulfilling the order with high-quality arms, Efraim Diveroli, David Packouz, and Alex Podrizki (the dudes) bought cheap Communist-style surplus ammunition from Balkan gunrunners. The trio then secretly repackaged millions of rounds of shoddy Chinese ammunition and shipped it to Kabul—until they were caught by Pentagon investigators and the scandal turned up on the front page of The New York Times.

That’s the “official” story. The truth is far more explosive. For the first time, journalist Guy Lawson tells the thrilling true tale. It’s a trip that goes from a dive apartment in Miami Beach to mountain caves in Albania, the corridors of power in Washington, and the frontlines of Iraq and Afghanistan. Lawson’s account includes a shady Swiss gunrunner, Russian arms dealers, Albanian thugs, and a Pentagon investigation that caused ammunition shortages for the Afghanistan military. Lawson exposes the mysterious and murky world of global arms dealing, showing how the American military came to use private contractors like Diveroli, Packouz, and Podrizki as middlemen to secure weapons from illegal arms dealers—the same men who sell guns to dictators, warlords, and drug traffickers.

This is a story you were never meant to read.

Guy Lawson is a New York Times bestselling author and award-winning investigative journalist whose articles on war, crime, culture, and law have appeared in The New York Times Magazine, Rolling Stone, GQ, Harper’s Magazine, and many other publications.

“Like the best stories about rogues, con artists and scammers, the magic is in the details. Guy Lawson's, Arms and Dudes, misses nothing. He gets it all.”
— Nick Pileggi, author of Wiseguy

“This is one of those books that, God help us, shouldn’t be true—but is. US governmental bungling, war in Afghanistan going awry, foreign hustlers making millions out of bilking heroic soldiers, and in the middle of it all are two barely post-teenager dopers fumbling their way into and out of the highest level of the sleazy arms business. Guy Lawson tells the disturbing story brilliantly. You’ll cringe, you’ll want to look away (a lot), but you won’t be able to stop turning the pages."
— Jeff Guinn, author of Manson

“Guy Lawson’s Arms and the Dudes is a triumph of investigative reporting and storytelling. This book is a mind-blowing account of how two kids turned themselves into some of the world’s biggest weapons dealers in the chaotic years of the Iraq war. I couldn’t put it down. If it were on the fiction shelf, the rollicking, riveting tale told within these pages would seem wildly implausible. But it’s not.”
— Rajiv Chandrasekaran, author of Imperial Life in the Emerald City and Little America

"This improbable true story tracks three South Florida slackers as they navigate the dangerous world of international arms dealers while ripping off the U.S. Department of Defense for a cool $300 million. It's the perfect beach reading for smart fathers everywhere."
— Esquire.com

"Lawson's eye for detail and research are commendable...details the backroom machinations, corruption, red tape, and intrigue that go along with high-stakes arms deals."
— Publishers Weekly

"[A] rollicking yarn...An eye-opener and an excellent job of reporting and writing."
— Kirkus Reviews

“A wildly entertaining saga with dual narratives. The first involves blackmail, criminals, hustlers, corrupt government officials, and three kids in way over their heads. The other, and for Lawson more important, side of the story, concerns how the Pentagon came to use private contractors like the dudes as proxies—and eventual fall guys—to secure weapons from gray market arms dealers, the only people who could supply what it needed.”
— MotherJones.com

"Extraordinary--a hell of a read."
— The New York Daily News

"It's a phenomenal book...I couldn't put it down."
— HuffPost Live

"Picture three twenty something dudes with little to no experience and a $300M arms contract with the US government. What could possibly go wrong?... Lawson does a great job weaving the stories together with a broader perspective on the war in Afghanistan and a government rife with incompetency...Verdict: Thrilling."
— Library Journal

"Arms and the Dudes tells a great story... Lawson offers readers a fun new take on a moral as old as time: When you fly too close to the sun, you end up on the ground."

“The book unfolds like a Hollywood movie project that requires no green light, only casting… The developments are so unbelievable that a writer less skilled than Lawson would have still written a compelling book. Instead, the reporter, whose first version was published in Rolling Stone in 2011, fills in context. Arms and the Dudes is as much about the collapse of American accountability in Iraq during the late ’00s as it is about the dudes.”

“Guy Lawson has done a miraculous job…a glorious piece of investigative journalism… No one’s clever ‘what if,’ this is a well-researched exposé of government and law gone wild. Intricately detailed and expertly paced, Mr. Lawson’s cautionary tale should lead to corrective action. Meanwhile, it is delightfully disturbing reading.”