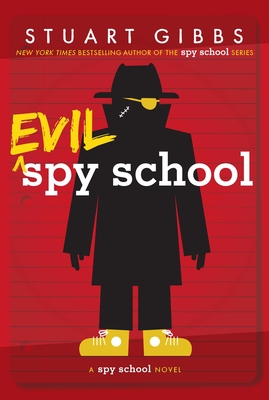 In the third book in the New York Times bestselling Spy School series, Ben gets kicked out of the CIA’s spy school and enrolls with the enemy.

During a spy school game of Capture the Flag, twelve-year-old Ben Ripley accidentally shoots a live mortar into the principal’s office—and immediately gets himself expelled. Not long after going back to the boring real world, Ben gets an offer to join evil crime organization SPYDER. And he accepts.

Ben can tell he’s a key part of their sinister plan, but he’s not quite sure what the plan is. Can Ben figure out what SPYDER is up to—and get word to the good guys without getting caught—before it’s too late?

Stuart Gibbs is the New York Times bestselling author of the Charlie Thorne series, FunJungle series, Moon Base Alpha series, Once Upon a Tim series, and Spy School series. He has written screenplays, worked on a whole bunch of animated films, developed TV shows, been a newspaper columnist, and researched capybaras (the world’s largest rodents). Stuart lives with his family in Los Angeles. You can learn more about what he’s up to at StuartGibbs.com.

With tongue-in-cheek humor and a gripping pace, readers who’ve enjoyed Gibbs’s previous novels will not be disappointed.
— School Library Journal