Me llaman heroe (They Call Me a Hero): Recuerdos de mi juventud (Hardcover) 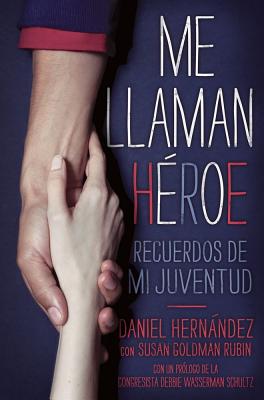 By Daniel Hernandez, Susan Goldman Rubin (With), Carlos Verdecia (Translated by)
Email or call for price
Subject to Availabilty

Daniel Hernandez helped save the life of Congresswoman Gabrielle Giffords, and his life experience is a source of true inspiration in this heartfelt memoir, told in Spanish.

“I don’t consider myself a hero,” says Daniel Hernandez. “I did what I thought anyone should have done. Heroes are people who spend a lifetime committed to helping others.”

When Daniel Hernandez was twenty years old, he was working as an intern for U.S. Representative Gabrielle Giffords. On January 8, 2011, during a “Congress on Your Corner” event, Giffords was shot. Daniel Hernandez’s quick thinking saved Giffords’s life until the paramedics arrived and took her to the hospital. Hernandez’s bravery and heroism has been noted by many, including President Barack Obama.

But while that may have been his most well-known moment in the spotlight, Daniel Hernandez, Jr., is a remarkable individual who has already accomplished much in his young life, and is working to achieve much more. This memoir, told in Spanish, explores Daniel’s life, his character, and the traits that a young person needs to rise above adversity and become a hero like Daniel.

Daniel Hernandez is a 2012 graduate of the University of Arizona who is credited with having saved the life of Congresswoman Gabrielle Giffords during the shooting rampage in Tucson, Arizona, on January 8, 2011, when he was an intern assisting the congresswoman with a constitutional event. He served as a member of the City of Tucson Commission on LGBT Issues, and is currently on the governing board of the Sunnyside Unified School District, where he attended public schools. He is dedicated to education advocacy and civic engagement. He is the author of They Call Me a Hero. Visit him at DanielHernandezJr.org.

Susan Goldman Rubin is the author of more than fifty books for young readers. One of her recent titles, Music Was IT: Young Leonard Bernstein, was a finalist for the 2012 YALSA Award for Excellence in Non-Fiction and won the 2012 Sydney Taylor Award for Older Readers. She lives in Malibu, California.

“On a day of enormous tragedy, we saw great bravery and compassion. When Daniel Hernandez heard gunshots that fateful day, he ran toward them, ultimately saving lives. This moving memoir tells the story of how Daniel became the quick-thinking, courageous and generous young man who would become a national hero."
— Nancy Pelosi

“I met Daniel Hernandez and came away feeling invigorated about America ’s future. We all watched Daniel in an incredible moment of heroism. Now, he’s made a life of service and whether he stays in local politics or hits the national stage, he will inspire America for a long time.”
— Erin Burnett, anchor of CNN's Erin Burnett OutFront

"Daniel Hernandez is a true American hero. I have had the pleasure of meeting him, and it reminded me why I love this country: Only in America can a young boy whose mother was an immigrant land an internship with his Congresswoman and in the most terrifying moment of his life run towards the bullets to save her life. He handled his newfound fame with grace and dignity and continues to inspire people across the country."
— Piers Morgan, host of CNN's Piers Morgan Tonight

"This account...hits all the right notes. Throughout, [Daniel Hernandez] comes across as self-assured but not full of himself, conscious of but not obsessed with his image and his status as a multiple role model, opinionated but not angry or preachy. An absorbing eyewitness view of a shocking event wrapped in a fluent, engaging self-portrait."
— Kirkus Reviews

"[This] tense, moment-by-moment recounting of the shooting spree is gripping...Throughout, Hernandez strikes a tone that is humble, earnest, and impassioned, and his story is inspiring not only for his bravery during the shooting, but also for his commitment to education advocacy and public service."
— Publishers Weekly

“Daniel’s now-famous bravery is matched only by his remarkable sense of duty and deep respect for public service. His story should be required reading for young people wondering if and when they can make an impact on the world. The answers are ‘yes’ and ‘right now.’"
— Chuck Wolfe, president and CEO, Gay & Lesbian Victory Fund and Institute

“Daniel Hernandez is a shining example of civic duty and resilience in the face of hardship. His story will inspire young people everywhere and remind us all that there are true heroes among us.”
— Arianna Huffington, president and editor-in-chief, Huffington Post Media Group

“Daniel Hernandez did not become an extraordinary man on that horrible day in Tucson; that’s just when the world learned of him.”
— Shepard Smith, anchor of The Fox Report on FOX News Channel

"The heroic young man’s story will be appreciated by politically minded youths as well as those looking for a role model."
— School Library Journal