The Sky Is Everywhere (MP3 CD) 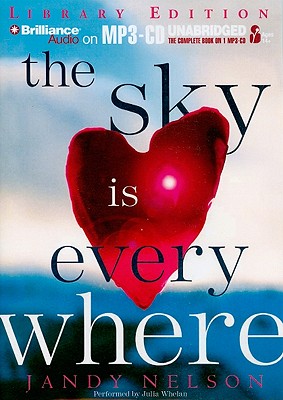 By Jandy Nelson, Julia Whelan (Performed by)
$39.97
Email or call for price.

“Seventeen-year-old Lennie Walker is heartbroken over her sister's death, and her incredible grief will touch anyone who picks up The Sky is Everywhere. However, Jandy Nelson succeeds in making this heart-wrenching tale uplifting and humorous through her great characters. You'll watch Lennie grow up, as well as out of the shadow her sister left behind, and you'll enjoy this novel every step of the way.”
— Nikole Bonacorsi, The River's End Bookstore, Oswego, NY

Seventeen-year-old Lennie Walker, bookworm and band geek, plays second clarinet and spends her time tucked safely and happily in the shadow of her fiery older sister Bailey. But when Bailey dies abruptly, Lennie is catapulted to center stage of her own life and, despite her nonexistent history with boys, suddenly finds herself struggling to balance two. Toby was Bailey's boyfriend; his grief mirrors Lennie's own. Joe is the new boy in town, a transplant from Paris whose nearly magical grin is matched only by his musical talent. For Lennie, they re the sun and the moon; one boy takes her out of her sorrow, the other comforts her in it. But just like their celestial counterparts, they can t collide without the whole wide world exploding.

Just as much a celebration of love as it is a portrait of loss, Lennie's struggle to sort her own melody out of the noise around her is always honest, often hilarious, and ultimately unforgettable.