Me, the Mob, and the Music: One Helluva Ride with Tommy James & The Shondells (Hardcover) 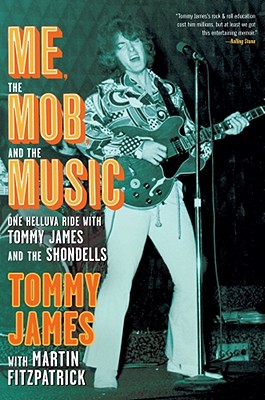 By Tommy James, Martin Fitzpatrick (With)
Email or call for price
Hard to Find

Everyone knows the hits—“Hanky Panky,” “Mony Mony,” “I Think We’re Alone Now,” “Crimson and Clover,” “Crystal Blue Persuasion.” They are nuggets of rock and pop history. However, few know the unlikely story of how these hits came to be..

Tommy James was discovered in 1966 at the age of nineteen, and was pursued by every record mogul in New York until, inexplicably, every offer but one quickly disappeared. James soon found himself in the office of Morris Levy at Roulette Records, where he was handed a pen and ominously promised “one helluva ride.” Morris Levy, the legendary “godfather” of the music business, needed some hits and Tommy would provide them..

Me, the Mob, and the Music tells the intimate story of the relationship between the bright-eyed, sweet-faced blonde musician from the heartland and the big, bombastic, brutal bully from the Bronx, who hustled, cheated, and swindled his way to the top of the music industry. It is also the story of this swaggering, wildly creative era of rock ‘n’ roll when payola and the strong arm tactics of the mob were the norm, and the hits kept coming..

Tommy James (born Thomas Gregory Jackson, April 29, 1947, Dayton, Ohio) is the pop-rock star best known as the leader of Tommy James and the Shondells. Performing locally in Niles, Michigan, from the age of 12, James went on to record many top hits, including "Hanky Panky," "I Think We're Alone Now," "Mony Mony," "Crimson and Clover," "Sweet Cherry Wine," "Mirage," "Do Something to Me," "Gettin’ Together," "Crystal Blue Persuasion," and "Draggin' the Line." He has sold over 100 million records, has been awarded twenty-three gold singles, and nine gold and platinum albums. His songs are widely used in television and film, and have been covered by Joan Jett, Billy Idol, Tiffany, Tom Jones, Prince, and R.E.M. Tommy James continues to tour the country and record.