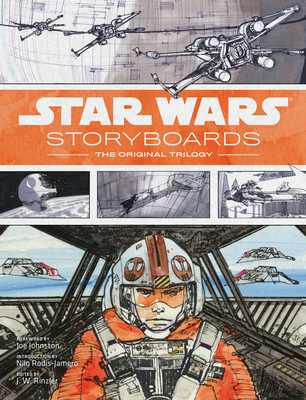 For the first time, Lucasfilm has opened its Archives to present the complete storyboards for the original Star Wars trilogy—the world-changing A New Hope and its operatic sequels, The Empire Strikes Back and Return of the Jedi—as well as never-before-published art from early conceptual and deleted scenes.

From the opening chase above Tatooine in A New Hope to the Battle of Endor in Jedi, this book presents the visual inspiration behind now-iconic moments. Readers can finally see a full set of storyboards by legendary artist Joe Johnston, as well as early boards for Episode IV by Alex Tavoularis and for Episode V by Ivor Beddoes, rarely seen Episode VI boards by Roy Carnon, and Ralph McQuarrie’s never-before-seen storyboards for Episode V.

“Star Wars fans, take note . . . the book offers a glimpse into the detailed planning and rounds of story revisions that went into the original films.”
— Parade Online

"Star Wars fans, rejoice — today is the big day that Lucasfilm opens up the archives and bestows upon you Star Wars Storyboards: The Original Trilogy."
— Flavorwire

"The book contains fantastic insight into how the films' stories and characters were conceived…"
— Esquire.com

"Nerd out over how Star Wars might have been."
— Wired

"Every Star Wars fan should get this Star Wars Storyboards book."
— Gizmodo