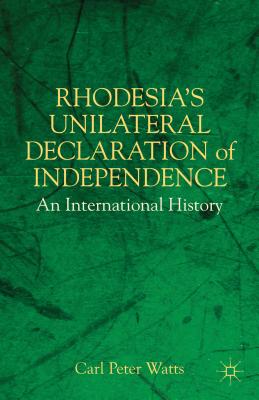 This book analyzes the weaknesses in Britain's Rhodesian policy in the 1960s and the strains that Rhodesia's UDI imposed on Britain's relations with the Commonwealth, the United States and the United Nations.

Carl Peter Watts completed his doctoral thesis on Rhodesia's UDI at the University of Birmingham, UK, where he taught modern history and war studies. He has also taught at several universities in the American Midwest. Dr. Watts is currently a Research Fellow in the Centre for Imperial and Postcolonial Studies at the University of Southampton, UK and a Fellow of the Royal Historical Society. He has published his research on various aspects of the Rhodesian crisis in journals such as Diplomatic History, The Journal of Imperial and Commonwealth History, and Twentieth Century British History.