Politics Is about Relationship: A Blueprint for the Citizens' Century (Hardcover) 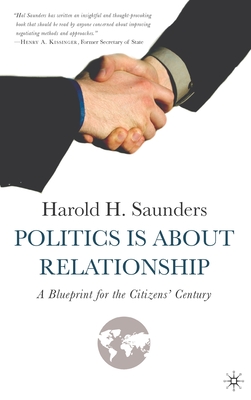 In this straightforward exploration of core problems facing humanity, Harold Saunders outlines how concerned citizens can bring about social and political change. Using examples from the U.S. to South Africa, Tajikistan to China, this book is full of real stories of how building 'relationship' among people can empower citizens outside government.

Harold H. Saunders is Founder and Chairman of the International Institute for Sustained Dialogue, Director of International Affairs at the Kettering Foundation, former member of the National Security Council Staff and former Director of Intelligence and Research at the State Department. He was US Assistant Secretary of State for Near Eastern and South Asian Affairs in the Carter Administration. He flew on the Kissinger shuttles in 1974- 75 and was a principal drafter of the Camp David accords in 1978. Since leaving governmentin 1981, he has developed a processcalled Sustained Dialogue from intensive experience in nonofficial dialogues. He is author of The Other Walls: The Arab-Israeli Peace Process in a Global Perspective, A Public Peace Process: Sustained Dialogue to Transform Racial and Ethnic Conflicts, and Sustained Dialogue in Conflicts: Transformation and Change.