Wizard of the Crow (Paperback) 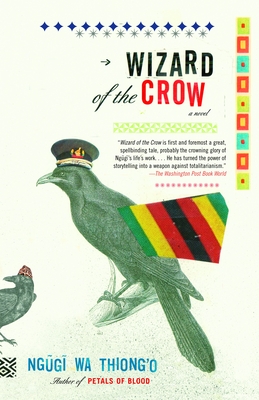 A landmark of postcolonial African literature, Wizard of the Crow is an ambitious, magisterial, comic novel from the acclaimed Kenyan novelist, playwright, poet, and critic.

Set in the fictional Free Republic of Aburiria, Wizard of the Crow dramatizes with corrosive humor and keenness of observation a battle for the souls of the Aburirian people, between a megalomaniac dictator and an unemployed young man who embraces the mantle of a magician. Fashioning the stories of the powerful and the ordinary into a dazzling mosaic, in this magnificent work of magical realism, Ngugi wa'Thiong'o—one of the most widely read African writers—reveals humanity in all its endlessly surprising complexity.

Ngũgĩ wa’Thiong’o has taught at Nairobi University, Northwestern University, Amherst College, Yale University, and New York University. He is Distinguished Professor of English and Comparative Literature at the University of California, Irvine. His many books include Wizard of the Crow, Dreams in a Time of War, Devil on the Cross, Decolonising the Mind, and Petals of Blood, for which he was imprisoned by the Kenyan government in 1977.

“Wizard of the Crow is first and foremost a great, spellbinding tale, probably the crowning glory of Ngugi’s life’s work. . . . He has turned the power of storytelling into a weapon against totalitarianism.” —The Washington Post Book World

“In his crowded career and his eventful life, Ngugi has enacted, for all to see, the paradigmatic trials and quandaries of a contemporary African writer, caught in sometimes implacable political, social, racial, and linguistic currents.” —John Updike, The New Yorker

“Ngugi is one of Africa’s greatest writers, and certainly the foremost voice of Kenyan literature. . . . Possibly the best comparison to make of Wizard of the Crow is with Salman Rushdie’s Midnight’s Children.” —San Francisco Chronicle