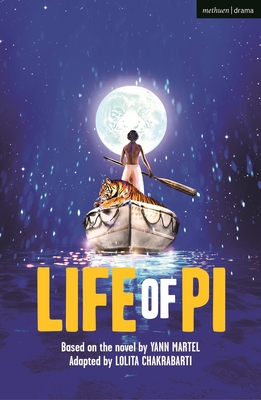 By Yann Martel, Lolita Chakrabarti (Adapted by)
Email or call for price
Out of Print

"Life of Pi will make you believe in the power of theatre" (Times).

After a cargo ship sinks in the middle of the vast Pacific Ocean, there are five survivors stranded on a lifeboat - a hyena, a zebra, an orangutan, a Royal Bengal tiger, and a sixteen year-old boy named Pi. Time is against them, nature is harsh, who will survive? Based on one of the most extraordinary and best-loved works of fiction - winner of the Man Booker Prize, selling over fifteen million copies worldwide - and featuring breath-taking puppetry and state-of-the-art visuals, Life of Pi is a universally acclaimed, smash hit adaptation of an epic journey of endurance and hope. Adapted by acclaimed playwright Lolita Chakrabarti, this edition was published to coincide with the West End premiere in November 2021.

Yann Martel is a Canadian writer. He is the author of a collection of short stories and four novels, most notably Life of Pi, for which he won the 2002 Man Booker Prize. Writing credits include: The Facts Behind the Helsinki Roccamatios; Self; Life of Pi; Beatrice and Virgil; The High Mountains of Portugal; and the non-fiction collection 101 Letters to a Prime Minister: The Completed Letters to Stephen Harper. Martel is presently at work on a novel about the Trojan War. He lives in Saskatoon, Saskatchewan, with the writer Alice Kuipers and their four children. Lolita Chakrabarti is an award-winning actress and playwright. Her work on Red Velvet earned the Evening Standard Charles Wintour Award for Most Promising Playwright 2012; The Critic's Circle Award for Most Promising Playwright 2013 and an Olivier Award nomination for Outstanding Achievement in an Affiliate Theatre 2012. Writing credits include: Red Velvet (Tricycle Theatre/St Ann's Warehouse/ New York/Garrick Theatre); Invisible Cities (Adaption/59 Productions/Ballet Rambert/Sidi Larbi Cherkhaoui/Manchester International Festival); The Greatest Wealth (The Old Vic); Last Seen: Joy (Almeida Theatre) and Red Velvet, The Goddess (BBC Radio 4).