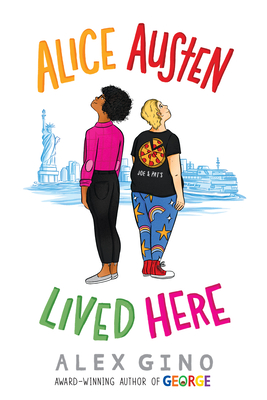 From the award-winning author of George, a phenomenal novel about queerness past, present, and future.

Sam is very in touch with their own queer identity. They're nonbinary, and their best friend, TJ, is nonbinary as well. Sam's family is very cool with it... as long as Sam remembers that nonbinary kids are also required to clean their rooms, do their homework, and try not to antagonize their teachers too much.

The teacher-respect thing is hard when it comes to Sam’s history class, because their teacher seems to believe that only Dead Straight Cis White Men are responsible for history. When Sam’s home borough of Staten Island opens up a contest for a new statue, Sam finds the perfect non-DSCWM subject: photographer Alice Austen, whose house has been turned into a museum, and who lived with a female partner for decades.

Soon, Sam's project isn't just about winning the contest. It's about discovering a rich queer history that Sam's a part of -- a queer history that no longer needs to be quiet, as long as there are kids like Sam and TJ to stand up for it.

Alex Gino loves glitter, ice cream, gardening, awe-ful puns, and stories that reflect the diversity and complexity of being alive. Their first novel, Melissa, was a winner of the Children’s Stonewall Award, the Lambda Literary Award, and the Children’s Choice Book Award. For more about Alex, please visit them at alexgino.com.

Praise for You Don't Know Everything, Jilly P!:

* "Gino's sophomore effort is every bit as affecting and important as their first novel, George." -- School Library Journal, starred review

* "[You Don't Know Everything, Jilly P!'s] thoughtful handling of characters and dynamics offers fodder for further discussion about privilege in all its forms." -- Publishers Weekly, starred review

* "A necessary and rewarding addition to any middle-grade collection." -- Kirkus Reviews, starred review

Winner of the Children's Stonewall Award

Winner of the Lambda Literary Award

* "Profound, moving, and -- as Charlotte would say -- radiant, this book will stay with anyone lucky enough to find it." -- Publishers Weekly, starred review

* "There is pain in George, but not without the promise of a better tomorrow." -- School Library Journal, starred review