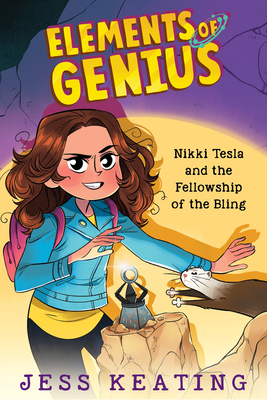 By Jess Keating, Lissy Marlin (Illustrator)
$16.99
On Our Shelves Now

This is book number 2 in the Elements of Genius series.

"For a group of geniuses who are supposed to help people, we do an awful lot of stealing."

Nikki Tesla and the rest of the Genius Academy team have agreed to pilfer a completely priceless, totally lethal high-tech ring. Why? Because a mad scientist on a power trip plans to use it to do some serious damage. And because the very same mad scientist has kidnapped Mary Shelley. Mess with one genius, and you mess with them all.

But mostly they're planning the heist of the century so Nikki can get to know her long-lost father who claims he isn't the criminal mastermind she believes him to be. After all, if a little international thievery can protect the world from evil, it just might save Nikki's family.

As a zoologist and author, Jess Keating has been sprayed by skunks, bitten by crocodiles, and victim of the dreaded paper cut. Her books blend science, humor, and creativity, and include the acclaimed My Life Is a Zoo middle-grade trilogy and award-winning picture books, like Shark Lady and Pink Is for Blobfish. Jess lives in Ontario, Canada, where she loves hiking, nerdy documentaries, and writing books for curious and adventurous kids. Jess can be found online at jesskeating.com or on Twitter @Jess_Keating.

Originally from the Dominican Republic, illustrator Lissy Marlin has a simple mission: bring a little bit of magic to everyday life one piece of art at a time! She lives in Philadelphia, Pennsylvania.

Praise for Elements of Genius #1: Nikki Tesla and the Ferret-Proof Death Ray:

"Keating's action-packed mystery...combines intelligence with superhero appeal. Nikki's comical narration is printed on graph-paper pages and embellished by illustrations, all of which give STEM a fun new spin." - Booklist

"Nikki is a heroine readers will want to tag along with in the promised series...[which] calls up Disney's Kim Possible, an apt echo as fans of that show will enjoy the female-led action here." -- The Bulletin of the Center for Children's Books

"This fast-paced caper features plot twists galore and a main character who confronts her past and learns that she can make friends along the way. A lively series kick-off." -- Publishers Weekly

Praise for My Life Is a Zoo:

* "Humor, poignancy and fascinating zoological facts infuse the narrative with a warm conversational tone that welcomes readers into the drama that is middle school." -- Kirkus Reviews, starred review

* "With her trademark kid-oriented wit and lighthearted touch, Keating leads readers through the daily emotional ups and downs of the typical just-turned-teenager." -- Kirkus Reviews, starred review