The Boy Who Became a Dragon: A Bruce Lee Story (Hardcover) 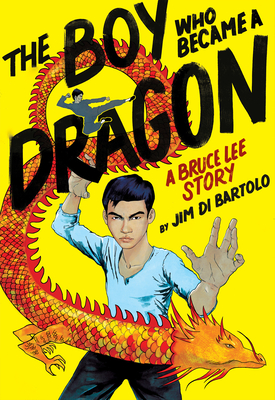 Bruce Lee was born on November 27, 1940 - in both the hour and the year of the dragon. Almost immediately, he was plunged into conflict: as a child in Hong Kong as it was invaded and occupied by the Japanese; as the object of discrimination and bullying; and as a teenager grappling against the influence of gangs.

As the world knows, Lee found his salvation and calling through kung fu - first as a student, then as a teacher, and finally as a global star. The Boy Who Became a Dragon tells his story in brilliant comic form.

Jim Di Bartolo is a mixed-media illustrator, painter, and visual storyteller. In his freelance career he has illustrated novels, comic books, and role-playing games. He and his wife, the author Laini Taylor, have collaborated on several books, and their most recent joint effort, Lips Touch: Three Times, was a National Book Award finalist. He lives in Portland, Oregon, with his wife and their daughter, and can be found online at jimdibartolo.com. Chances are, he probably could use more sleep.

Praise for The Boy Who Became a Dragon:

"Visual highlights include several intricate martial arts displays and gorgeous, painterly spreads that focus on the films that turned Lee into an indelible part of world culture." -- Booklist

"If you are looking for a high quality graphic novel biography, then look no further...the illustrations and plot work seamlessly and realistically together to tell Bruce Lee's life story." -- School Library Connection