Why Young Men: The Dangerous Allure of Violent Movements and What We Can Do About It (Hardcover) 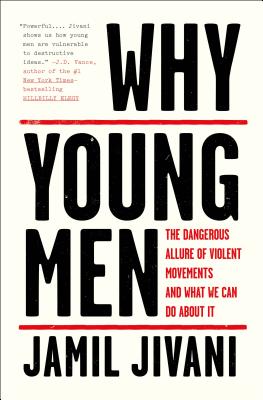 Across the world, we see an explosion of unpredictable violence committed by alienated young men.

Jamil Jivani recounts his experiences working as a youth activist throughout North America and the Middle East, drawing striking parallels between ISIS recruits, gangbangers, and Neo-Nazis in the West.

Having narrowly escaped a descent into crime and gang violence in his native Toronto, Jivani has devoted his life to helping other at-risk youths avoid this fate in cities across North America. After the Paris terrorist attacks of 2016, he traveled to Europe and the Middle East to assist Muslim community outreach groups focused on deterring ISIS recruitment.

Why Young Men is the story of Jivani’s education as an activist on the front lines of one of today’s most dangerous and intractable problems: the explosion of violence among angry young men throughout the world. Jivani relates his personal story and describes his entrance into the community outreach movement, his work with disenfranchised people of color in North America and at-risk youth in the Middle East and Africa, and his experiences with the white working class. The reader learns along with him as he profiles a diverse array of young men and interviews those who are trying to help them, drawing parallels between these groups, refuting the popular belief that they are radically different from each other, and offering concrete steps toward countering this global trend.

Jamil Jivani grew up in a mostly immigrant community in Toronto, where he was nearly lost to feelings of hopelessness, anger, and hate, but he turned his life around with the support of role models and mentors. He went on to graduate from Yale Law School, teach at Osgoode Hall Law School, and dedicate his career to supporting youth facing challenges similar to those he experienced. His work has taken him from Belgium and Egypt, where he studied ways to help young men escape the influence of terrorist groups, to Ohio, where he partnered with JD Vance to help solve America's opioid crisis. Jivani's leadership has been recognized by many organizations, including the International Development and Relief Foundation, Yale University, and York University. At 31 years old, he survived a fight with stage IV cancer, which gave him greater insights into how people can overcome adversity. Why Young Men is his first book.

"Powerful....Jivani shows us how young men are vulnerable to destructive ideas." —J.D. Vance, author of the No. 1 New York Times-bestselling Hillbilly Elegy

“Powerfully moving and refreshingly clear-eyed, Why Young Men is a brilliant exploration of race, class, hopelessness, and why all too many young men turn to radicalization and violence. This book is a must-read for anyone who cares about solving one of the most important problems of our day.” —Amy Chua, author of Battle Hymn of the Tiger Mother and Political Tribes

“A compelling case that radicalization grows out of marginalization…professor and activist Jivani offers a compassionate analysis of sidelined youth and does so with a special authority—because he was one.” —Dina Temple-Raston, Washington Post

"Jivani compels us through the rare lens of lived experience, and he inspires us by immersing himself into a volatile environment to ask real questions and get real answers. More emphatically, he demands discourse as his convincing composition is richest in research. Riveting, courageous and analytically stimulating.” —Michael “Pinball” Clemons, CFL Hall of Fame player, philanthropist and author of All Heart

“Armed with his personal experience and cleared-eyed analysis, Jamil Jivani addresses a crucial question: why are so many young men prone to violence? Jivani astutely dissects the commonality of causation and searches out solutions. This book is a path forward for us all.” —Mark Sakamoto, author of Forgiveness

“A provocative and deeply personal response to the question he poses in the title. Whether you agree with his conclusions or not, there’s no denying the vigour of his arguments and the passion in his heart.” —Kamal Al-Solaylee, author of Intolerable and Brown

"In this passionate account, lawyer and activist Jivani lays out a vision for keeping young black and Muslim men from becoming radicalized by violent movements such as the Nation of Islam, ISIS, and the alt-right." —Publishers Weekly Review

"Toronto-based lawyer and community organizer Jivani explores a widely considered yet vexing issue: the connections between movements, from white nationalism to radical fundamentalism, and a population of angry, hopeless men...An earnest and mostly engaging attempt at 'thinking about the diverse reasons for the destruction young men cause.'" —Kirkus Review