Cowboys and Indies: The Epic History of the Record Industry (Hardcover) 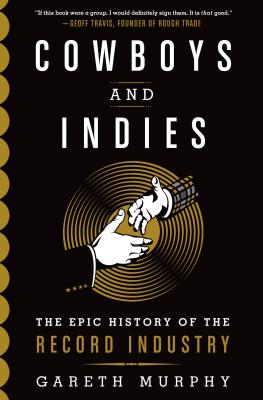 Cowboys and Indies is nothing less than the first definitive history of the recording industry on both sides of the Atlantic.

From the invention of the earliest known sound-recording device in 1850s Paris to the CD crash and digital boom today, author and industry insider Gareth Murphy takes readers on an immensely entertaining and encyclopedic ride through the many cataclysmic musical, cultural, and technological changes that shaped a century and a half of the industry.

· the behind-the-scenes players of the British Invasion

Drawing from memoirs, archives, and more than one hundred exclusive interviews with the legends of the record industry, including the founders and CEOs of Atlantic, Chrysalis, Virgin, A&M, Sub Pop, and Sire, this book reveals the secret history behind the hit-making craft. Remarkable in scope and impressive in depth, Cowboys and Indies chronicles the pioneers who set the stylus on the most important labels and musical discoveries in history.

GARETH MURPHY is the author of Cowboys and Indies: The Epic History of the Record Industry and was named Writer of the Year in the 2017 PPA Independent Publisher Awards (UK) for his work in journalism. He lives in Paris with his wife and son.

“Murphy's exhaustive research is complemented with an engaging prose…[the] account highlights a cast of fascinating characters, and it's these, individual stories, and anecdotes that make Murphy's book as engaging as a good TV-show can be, and a worthwhile read for any scholar of music, history, and society.” —Future of Music Coalition, "Our Favorite Music Books of 2014"

“The book is more than an index of famous names and iconic record labels. It's a humanistic, historical and cultural approach to an iconic industry. Mr. Murphy shows the business behind the music, and the music behind the business -- a rare and insightful treat.” —Pittsburgh Post-Gazette

“This lovingly written book…is a celebration of the indie heroes who shaped the industry while giving groundbreaking artists a platform… Like the Last Shop Standing of record labels, Cowboys And Indies tells their story.” —Record Collector, 5 star review

“A new, impressively wide-ranging history of the record biz.” —Eric Alterman, The Nation

“Indeed, the very backbone of what makes Cowboys & Indies so compelling is the stories that wind up making the careers of these numerous figureheads....he has ended up crafting a hell of a book that over time may not only become any music-person's historical go-to, but may just very well become a cornerstone of the genre.” —PopMatters.com

“Record labels, at their best, are invariably driven by the taste, the personality, and the ambition of one man, or woman - this book fascinatingly charts their course, their perversity, their bloody mindedness. It's those men, those labels, that found and broke the artists who have created our musical world.” —Martin Mills, founder of Beggar's Group

“Just when you thought the record label beast was dead and buried, along comes Gareth Murphy with a tour de force that makes you almost want to dance with that devil again. Through COWBOYS AND INDIES, new artists will get a sense of history that will enlighten their success and lessen the pain of being ripped off!” —Andrew Loog Oldham, Rolling Stones producer, Immediate Records founder

“Murphy captures the ever-changing nature of the record industry as it ebbs and flows with trends, technology and time... He lets the record execs, producers, and talent scouts tell their own stories, giving this work a personal feel and providing music lovers with first-hand accounts of how many great artists were discovered, what it is like when labels fight over bands, and the perilous nature of being too big or too small... Through setting out to document the lineage of the record industry, which he's done, Murphy has as well created a history of popular music told from the inside out to give music fans and historians a new and dynamic perspective of this oft-covered topic.” —Publishers Weekly

“Cowboys and Indies details the juicy history and monumental egos of record companies…[it is] a fascinating subject and is packed with interesting facts …a worthwhile read.” —Montreal Gazette

“Gareth Murphy's Cowboys and Indies: The Epic History of the Record Industry comes just as billed…this is a rich and rewarding tale, a survey course on the history of recorded music.” —Relix Magazine

“Snappily-written...The result is the ever-evolving story of the record industry and thus of popular culture itself...it is indispensable as a single-volume overview...it's an immensely satisfying appetizer, served up on a platter of paper instead of vinyl.” —The Houston Press

“Spectacular, compelling, evocative - this book places you at the heart of the record industry's defining moments. Far more than a recounting of the history, it's an artful and long-overdue look at the fantastic characters, companies, and shifting cultures that have given birth to the soundtrack of modern life. Essential reading.” —Craig Kallman, CEO at Atlantic Records

“Thought I knew everything about the music business. Must admit, I learned quite a bit inside these pages. Highly recommended!” —Seymour Stein, co-founder and chairman of Sire Records

“Cowboys & Indies passionately tells the story of those driven individuals who trusted their own taste and instincts and, in turning a deaf ear to the commonplace, gave shape to the world of modern music. Essential reading!” —Jac Holzman, founder of Elektra

“If this book was a group, I would definitely sign them. It is that good.” —Geoff Travis, founder of Rough Trade