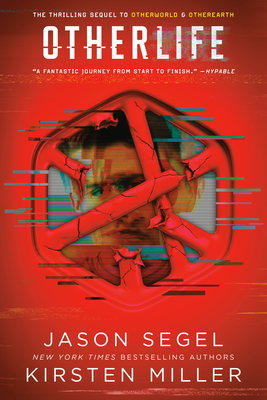 This is book number 3 in the Last Reality series.

Return to the series BuzzFeed compared to Ready Player One with the third book in the fast-paced trilogy from New York Times bestselling authors Jason Segel and Kirsten Miller that's perfect for fans of HBO's Westworld.

Simon, Kat, Busara, and Elvis are on the run with the tech super-villains at the Company hot on their heels. The new VR gaming experience created by the Company, OtherEarth, will change how the world experiences gaming. Paired with the hardware the Company developed, it has the potential to alter our reality forever.

The Company is on its way to becoming the world's newest superpower. And Simon is determined to shut them down forever. But to do that, he'll have to survive OtherLife--the next phase of gaming, and a complete reality reboot.

Jason Segel is an actor and a writer. Segel wrote and starred in Forgetting Sarah Marshall and cowrote Disney's The Muppets, which won an Academy Award for Best Original Song. Segel's film credits include The End of the Tour; I Love You, Man; Jeff Who Lives at Home; Knocked Up; and The Five-Year Engagement, among others. On television, Segel starred on How I Met Your Mother as well as Freaks and Geeks. He is the coauthor of the New York Times bestselling Nightmares! series--Nightmares!; Nightmares! The Sleepwalker Tonic; Nightmares! The Lost Lullaby; and Everything You Need to Know About Nightmares! and How to Defeat Them. OtherLife is his third novel for young adults. To learn more about him, you can follow @jasonsegel on Twitter.

Kirsten Miller lives and writes in New York City. She is the author of the acclaimed Kiki Strike books, the New York Times bestseller The Eternal Ones, and How to Lead a Life of Crime. OtherLife is the seventh novel Kirsten has written with Jason Segel. You can visit Kirsten at kirstenmillerbooks.com or follow @bankstirregular on Twitter.

Praise for the Last Reality series:

“Full of high stakes, thrillers, and fantastic twists and turns, fans of Ready Player One are sure to love this addictive read.” —BuzzFeed

“A fantastic journey from start to finish.” —Hypable.com