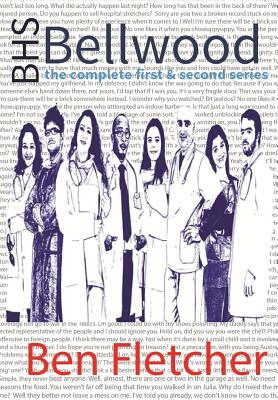 By Ben Fletcher
Email or call for price
Hard to Find

Welcome to BHS Bellwood, a private hospital located in Wilmslow, Cheshire. This is a hospital where you can have your every need catered to by the highly trained chef while a doctor confuses your medical records with your star sign. Do not forget to take a quick visit to the bathroom to meet the hospital mourner or to the office of the hospital manager for a beer before you go. BHS Bellwood is a sitcom created and written by Ben Fletcher, the series follows the running of a private hospital in England and the day to day lives of the hospital staff such as the Australian Manager and not very well qualified surgeons. BHS Bellwood: The Complete First & Second Series contains all six episodes from the first series, all five episodes from the second series and the opening scenes to the BHS Bellwood: Down Under feature length presentation. Introduction (Extract) I have no doubt that every single person who reads this book, or at least the vast majority of people who read this book will have, at some point in time, watched an episode of a sitcom, or for those of you who like to be slightly more precise, a little old fashioned or exert a degree of OCD, a situation comedy. A few years ago I was watching one of these sitcoms and came up with a quick thought in the back of my mind, 'I bet that I would be able to write one of these'. I never really thought this particular idea through as much as I probably should have, but I did decide to go through with it and eventually I came up with and wrote what you are holding right now. It does seem fairly odd to be writing this introduction to what is essentially just a book of scripts. Many of the true British and highly successful sitcoms such as 'Blackadder' or 'Fawlty Towers', go through the process of being produced and broadcast before they gain a group of dedicated fans, for whom the decision is made to release the original scripts of that sitcom in the format of a book, of course, this does also add an excellent and easy extra stream of revenue for the writers and producers of that sitcom too. This book that you are holding in your hands at this current point in time however, is somewhat different to the norm. About The Writer Aged only 17, Ben Fletcher became one of the UK's youngest published writers when his first title was released in August 2013 for Amazon Kindle and then later print in October of the same year. He is the writer of the BHS Bellwood sitcom series which has gained global interest, he is also the founder of London based business Unknown Media which was founded with the aim of helping new and upcoming talent break into the competitive entertainment and media industries. In January 2014 he undertook a UK tour to give talks to sixth form students which took him to the beautiful Buckinghamshire town of Amersham, the UK's capital of rain Cardiff and the red light district of Manchester after he forgot just where his hotel was. Today Ben Fletcher lives in London and is one of the UK's newest and upcoming writer, comedian and businessman. Twitter @BenSFletcher.