The Battle of Pilot Knob: Thunder in Arcadia Valley (Paperback) 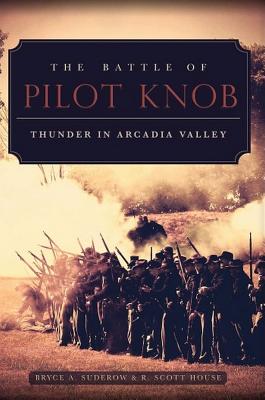 In the fall of 1864, Confederate General Edmund Kirby Smith appointed Major General Sterling Price to lead a raid behind Federal lines into Missouri and to capture St. Louis or Jefferson City. Price entered Missouri with an army of 12,000 men but, instead of moving directly to St. Louis, decided to attack the weakly defended Federal post at Pilot Knob, Missouri, guarded by an insignificant earthwork known as Fort Davidson. After midnight on September 27, 1864, despite the large number of Confederate troops camped around the fort, the Union soldiers silently exited the fort, leaving behind a small group to detonate the fort’s powder magazine and destroy the remaining supplies. With Confederate troops in pursuit, the small band of Union soldiers, civilians, and escaped slaves began a miraculous 66-mile march to the railroad at Leasburg. The first edition of this book, entitled Thunder in Arcadia Valley: Price’s Defeat, September 27, 1864, by Bryce Suderow, was out of print for years. The current revised edition, by Suderow and R. Scott House, has been doubled in size—including new text and eyewitness narratives, new maps, and additional photos.

Bryce A. Suderow spent 20 years doing Civil War research for many Civil War authors, among them Gordon Rhea, Eric Wittenberg, Scott Patchan and J. David Petruzzi. He has retired from research so he can devote full time to writing. He is the author of four books and edited The Supplement to the Official Records and The Petersburg Campaign. He lives in Washington, D.C. Retired after teaching for 26 years, Scott House works part-time as a natural resources consultant for the Cave Research Foundation. He is an active Civil War re-enactor, helps interpret and manage the Fort D Historic Site, writes on Civil War topics, and has mapped more than 700 caves in five states. He and his wife (and dogs) live in their home and cabin at Cape Girardeau and Brunot, MO, both are Civil War sites.