Fat Chance: We Were the Last Gasp of the Sixties and the Birth of Americana Music But Was America Ready for Us? (Paperback) 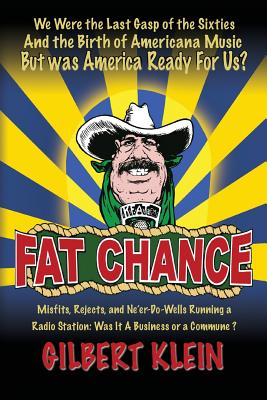 By Gilbert Klein
$24.94
Available at Warehouse

IT BEGAN WITH TWO ANARCHISTS AND A PROMISE OF FREE LAUNDRY

Jeremy Lansman owned a low-wattage, listener-supported free-form radio station with his mostly absentee partner, Lorenzo Milam, in a seedy, decaying neighborhood in St. Louis. Jeremy was a radical, a shit-stirrer, an electronics genius and a free thinker. Lorenzo was brilliant, crippled, angry and odd. In the communal hippie ethos that was suddenly everywhere, the station owned a washing machine and invited everyone in the community to use it-free.

Laura Ellen Hopper was a St. Louis hippie runaway who heard about the washing machine and, being of the community and needing clean clothes, she went to the station, met Jeremy, and they became a couple, living and working at the station.

Lorenzo had already moved on to other cities to squander his fortune and his health on other non-commercial stations, but Jeremy and Laura Ellen had other plans. They wanted out of St. Louis, so they sold the station and got a startling amount of money for it. They were going west. They had bigger fish to electrify.
And what they did there in Gilroy, California gave birth to Americana music. It was also the last gasp of the Sixties and a bit of history in its own right. And what a ride it was.