Divert!: Numec, Zalman Shapiro and the Diversion of Us Weapons Grade Uranium Into the Israeli Nuclear Weapons Program (Paperback) 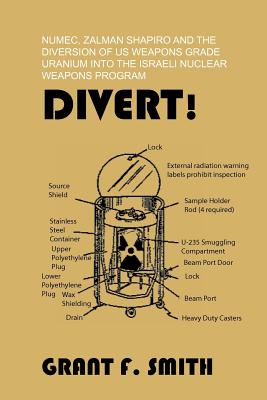 Based on an exhaustive review of formerly classified government documents-as well as previously unexplored corporate filings, office diaries and unguarded interviews-Grant F. Smith has written a riveting story of the 1960s diversion of US weapons-grade nuclear material from an Israeli front company in Pennsylvania into the clandestine Israeli atomic weapons program. The talented but highly conflicted founder of the Nuclear Materials and Equipment Corporation (NUMEC)-Dr. Zalman Mordecai Shapiro alongside his close friend and financial backer David Lowenthal-engaged in a ferocious clandestine drive to funnel the most valuable military material on earth that forever tilted the balance of power between Israel and the world. Divert chronicles Zalman Shapiro's journey from crafting ingenious innovations for the Nautilus nuclear submarine in the 1950s to his costly pursuit of America's most advanced hydrogen bomb designs in the 1970s. Tasked during secret summits with high-level Israeli intelligence agents, guided by Israel's top nuclear arms designers, and defended by Israel and its US lobby, Shapiro and NUMEC drove the CIA and FBI from furious outrage to despair. Presidents from LBJ to Jimmy Carter secretly grappled with how to respond to Israel's brazen theft of American nuclear material before finally deciding to bury the entire affair in classified files. But NUMEC's toxic secrets have refused to be buried alive. Newly declassified wiretaps have risen from the grave, detailing Shapiro's utter contempt for worker and nuclear safety. David Lowenthal's role as an international refugee smuggler between the US, Europe and Israel-before organizing financing for NUMEC-is placed under new scrutiny. This explosive story emerges even as the US Army Corps of Engineers struggles to quietly clean NUMEC's toxic waste near Apollo, Pennsylvania with $170 million in taxpayer funding. At a time when America is coming under intense pressure to attack on the mere suspicion that Iran is diverting nuclear material, Divert stands as the ultimate cautionary tale of how US Middle East policy is continually undermined from within by corruption, immunity, deceit and unwarranted secrecy.