On the Meaning of Life (Paperback) 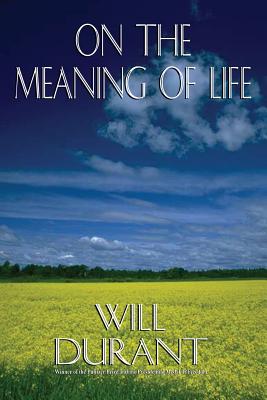 In the Fall of 1930 Will Durant found himself outside his home in Lake Hill, New York, raking leaves. He was approached by a well-dressed man who told him in a quiet tone that he was going to kill himself unless the philosopher could give him a valid reason not to. Not having the time to wax philosophic on the matter, Durant did his best to furnish the man with reasons to continue his existence. Haunted by the encounter with the despondent stranger, Durant contacted 100 luminaries in the arts, politics, religion and sciences, challenging them to respond not only to the fundamental question of life's meaning (in the abstract) but also to relate how they each (in the particular) found meaning, purpose and fulfillment in their own lives. Durant turned their answers and his own into a book entitled "On The Meaning Of Life", which was released to the general public in 1932. Unpromoted, the litte treasure found its way into few hands, and almost no copies of the book exist today. Now available for a new generation through Promethean Press, "On The Meaning Of Life" is a powerful book on a very powerful topic. In this book Will Durant has fashioned an unprecedented "dream team" of luminaries that is both profound and diverse: poets, philosophers, saints, inmates, athletes, Nobel Prize winners, college professors, psychologists, entertainers, musicians, authors and leaders. Within their varied insights, despite their uniqueness as individuals and the very different lives they led, the reader will note a consistent thread running through their viewpoints, revealing a commonality among human beings who not only seek meaning in life, but who actually achieve it.