The Frontiersmen: A Narrative (Paperback) 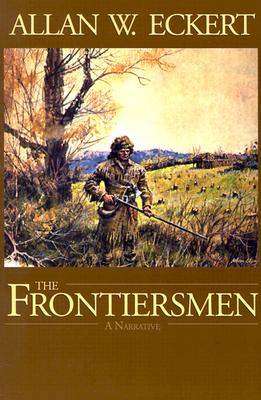 By Allan W. Eckert
Email or call for price
Subject to Availabilty

Against the background of such names as George Rogers Clark, Daniel Boone. Arthur St. Clair, Anthony Wayne, Simon Girty, and William Henry Harrison, Eckert has recreated the life of one of America's most outstanding heroes, Simon Kenton. Kenton's role in opening the Northwest Territory to settlement more than rivaled that of his friend Daniel Boone. By his eighteenth birthday, Kenton had already won frontier renown as woodsman, fighter, and scout. His incredible physical strength and endurance, his great dignity and innate kindness made him the ideal prototype of the frontier hero. The Frontiersmen is equally the story of one of history's greatest leaders, whose misfortune was to be born to a doomed cause and a dying race. Tecumseh, the brilliant Shawnee chief, welded together by the sheer force of his intellect and charisma and incredible Indian confederacy that thrust of the white man's westward expansion. Like Kenton, Tecumseh was the paragon of his people's virtues.