The Mystical City of God: A Popular Abridgment (Abridged / Paperback) 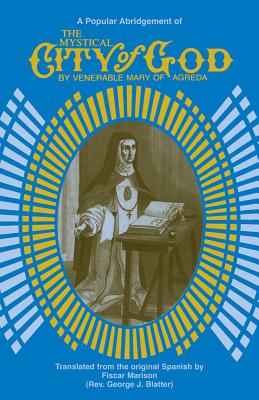 The Mystical City of God by Venerable Mother Mary of Jesus of Agreda (1602-1665) is a monumental four-volume, 2,676-page history of the life of the Blessed Virgin Mary, as revealed by Our Lady to this 17th-century Spanish nun. Venerable Mary saw in ecstasy all the events recorded here. Later, Our Lady told her to write them down in a book-the result is The Mystical City of God, acclaimed by Popes, cardinals and theologians, a book which has inspired the laity and the clergy for over 300 years and which has gone into sixty editions in various languages. More than just the life of the Blessed Virgin Mary, this book also contains information about the creation of the world, the meaning of the Apocalypse, Lucifer's rebellion, the location of Hell, the hidden life of Jesus, Mary and Joseph, intimate details about Our Lord's life, and many other enthralling topics. The translator, Father George J. Blatter, a Chicago priest, first read the book in German and was so impressed that he learned Spanish in order to make a proper translation into English. His first edition appeared in 1912, ten years after he had started work. The purpose of this popular abridgement is to bring to an even wider readership the sublime truths found in The Mystical City of God. "Just as I have told you that he who knows Me knows also My Father, so I now tell you that he who knows My Mother knows Me." -The Mystical City of God, Vol. III, p. 765.

Venerable Mother Mary of Jesus of Agreda, also known as the Blue Nun, was born in 1602 at Agreda, Spain. She possessed a considerable amount of divine knowledge even at a very young age, and consequently was confirmed at just four years old. When she was twenty-five, Mary was instituted as president of a Franciscan nunnery that her mother left behind after the older woman's death. She wrote fourteen books throughout her lifetime, among them the four-volume Mystical City of God, and also served as spiritual advisor to King Philip IV of Spain. It has also been said that her writings were inspirational for Mel Gibson as he produced his film The Passion of the Christ, released in 2004. Mother Mary of Jesus died in 1665 at the age of sixty-three, and was declared venerable by Pope Clement X less than ten years later.