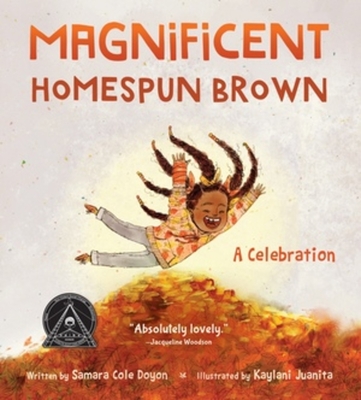 "The definition of brown joy. THESE are the normalizations in stories that we need, unadulterated Black and Brown joy full of self-esteem and confidence..." the tiny activist

Told by a succession of exuberant young narrators, Magnificent Homespun Brown is a story -- a song, a poem, a celebration -- about feeling at home in one’s own beloved skin.

With vivid illustrations by Kaylani Juanita, Samara Cole Doyon sings a carol for the plenitude that surrounds us and the self each of us is meant to inhabit.

Samara Cole Doyon is both a second-generation Haitian American and a deeply rooted Mainer, with half of the roots of her family tree reaching generations deep into the soil of the Pine Tree State. She is a freelance writer, teacher, wife, and mother. She has been a regular contributor at Black Girl In Maine Media and has been featured in the “Deep Water” poetry column of the Portland Press Herald.

Kaylani Juanita’s mission as an artist is to support the stories of the underrepresented and create new ways for people to imagine themselves. Her work has appeared at the Society of Illustrators and the BBC website, and she is the illustrator of the picture books Ta-Da! and winner of the ALA Stonewall Book Award for When Aidan Became a Brother. She lives in the Bay Area in California. Look for her online at kaylanijuanita.com and @kaylanijuanita on Twitter and Instagram.

Whether this delightful book is a mirror or a window for a child, it is a must-read for its celebration of love for oneself and one’s family. - Starred Review
— Clara Hendricks, Cambridge Public Library, MA

This book is stunning, the definition of Brown Joy. I’m completely obsessed already and read the book twice immediately after opening it. The story itself has a handful of narrators, and is written in lyrical prose much like I Am Brown and From Tan to Tamarind.  The narrators fully embody happiness and comfortability in their own skin, exuberantly taking on a multitude of situations throughout the story.

And can we just talk about these illustrations for a moment?? Kaylani Juanita illustrated one of my favorite books, When Aidan Became a Brother, and has possibly outdone herself with her work between these book covers. You can practically hear the giggles tumbling out of the characters mouths and flowing off of the pages into the air entirely. The representation is exquisite. A father and his daughter going on a hike, but she has both a cane and a service dog. A pair of siblings at a fair, a family at the beach. But nothing is point out about mobility devices or hearing aids, they purely exist as representation of the beautiful world we live in. THESE are the normalizations in stories that we need, unadulterated Black and Brown joy full of self-esteem and confidence being explained with SAT-worthy vocabulary. I truly love this book, it’s described on the cover as a celebration but it’s so much more than that. The conviviality conveyed in this picture book draws on the strength of family, ancestors, friendship, and finding the everyday jubilance in our lives.

This "celebration" makes magic out of the everyday joys of being in the world. - Starred Review
— MAGNIFICENT HOMESPUN BROWN [STARRED REVIEW!]