Iran and the Bomb: Solving the Persian Puzzle (Paperback) 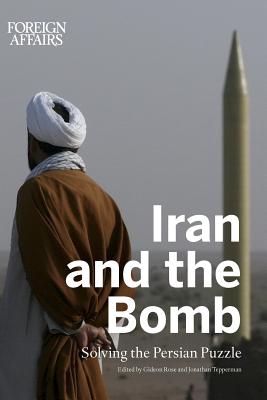 Bringing together a broad range of important articles from Foreign Affairs and ForeignAffairs.com, Iran and the Bomb tells the story of the Islamic Republic of Iran's quest for nuclear weapons and the outside world's struggle to respond. The arguments presented span every significant position on the political spectrum, and the authors include world-renowned experts from several disciplines, backgrounds, and countries, including Jahangir Amuzegar, Ronen Bergman, Ehud Eiran, Richard Haass, Michael Ledeen, James Lindsay, Colin Kahl, Matthew Kroenig, Suzanne Maloney, Mohsen Milani, Scott Sagan, Gary Sick, Ray Takeyh, Kenneth Waltz, and more. An introduction by Foreign Affairs Editor Gideon Rose sets the stage for the debates that follow. Released as policymakers in Washington and other capitals debate whether to deal with the Iran question once and for all, Iran and the Bomb contains everything needed to understand the crisis and develop an informed, independent opinion on what should be done about it.

Gideon Rose was appointed Editor of Foreign Affairs in October 2010. He was Managing Editor of the magazine from 2000-2010. He has also served as Associate Director for Near East and South Asian Affairs on the staff of the National Security Council and Deputy Director of National Security Studies at the Council on Foreign Relations, and has taught American foreign policy at Princeton and Columbia. He is the author of How Wars End (Simon & Schuster, 2010). Jonathan Tepperman was appointed Managing Editor of Foreign Affairs in January 2011. He previously worked at Foreign Affairs from 1998-2006 before moving to Newsweek International, where he was Deputy Editor in charge of Asia, Europe, Africa, and Middle East coverage, and then to Eurasia Group, where he was Managing Editor and a director. He has written for a range of publications including The New York Times, The Washington Post, The Wall Street Journal, The International Herald Tribune, The New Republic, The American Prospect, and others. He has law degrees from Oxford and New York University.