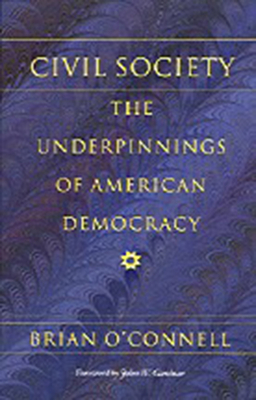 Edward Gibbon said of the ancient Athenians, "when the freedom they wished for most was freedom from responsibility, then Athens ceased to be free." America is the longest-lived democracy in the history of the world, but there are signs that our own extraordinary system faces a similar peril. A vibrant civil society, characterized by active citizen participation, is essential to a strong democracy, argues Brian O'Connell, and in his new book he offers a citizen's guide to this concept of civil society -- what it is, how it functions, its limitations and potential, and most importantly, what individuals can do to nurture and support it. It is designed to provide practical understanding and foster action among community and national leaders, including mayors, civic leaders, school boards, public administrators, independent sector leaders, scholars, and teachers. Civil Society explores the idea and the reality of citizen participation, including government's essential responsibility to preserve the freedoms that allow and encourage it. It also traces the contemporary weakening of this tradition as a result of indifference, selfishness, loss of confidence in government, governmental limits on citizen participation, the influence of special interests on elected officials, separation between the haves and have nots, intolerance and incivility. Founding president of INDEPENDENT SECTOR and first chairman of CIVICUS: World Alliance for Citizen Participation, Brian O'Connell draws on his extensive practical experience of civil society to outline concrete actions that can improve the prospects of an enduring democracy, including: - increasing the role of education in preparing students for the rights and responsibilities of citizenship; - reorienting public administrators towards a greater receptivity of citizen involvement; - expanding research into and conducting regular evaluations of the state of civil society itself; - developing a concerted effort to share and apply what we already know about passing on to future generations the nation's traditions of service and generosity. In Civil Society, Brian O'Connell has created a practical handbook for elected officials, community leaders, and ordinary citizens who seek to nurture and expand this crucial dimension of a democratic society.

BRIAN O'CONNELL is Professor of Public Service at the Lincoln Filene Center for Citizenship and Public Affairs at Tufts University and a Fellow and Trustee of the National Academy of Public Administration. Founding president and former active head of INDEPENDENT SECTOR, the US umbrella group for voluntary action and philanthropy, he also served as Chairman of the Organizing Committee and first Chairman of CIVICUS: World Alliance for Citizen Participation. His 13 books include Powered by Coalition (1997), People Power (1994), Volunteers in Action (1989), Philanthropy in Action (1986), and America's Voluntary Spirit (1983).