Out of the Northwoods: The Many Lives of Paul Bunyan, With More Than 100 Logging Camp Tales (Hardcover) 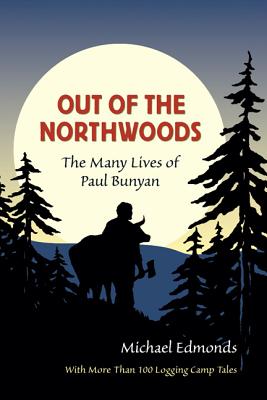 By Michael Edmonds
$24.95
Email or call for price.

Every American has heard of the lumberjack hero Paul Bunyan and his big blue ox. For 100 years his exploits filled cartoons, magazines, short stories, and children's books, and his name advertised everything from pancake breakfasts to construction supplies. By 1950 Bunyan was a ubiquitous icon of America's strength and ingenuity. Until now, no one knew where he came from—and the extent to which this mythical hero is rooted in Wisconsin.

Out of the Northwoods presents the culture of nineteenth-century lumberjacks in their own words. It includes eyewitness accounts of how the first Bunyan stories were shared on frigid winter nights, around logging camp stoves, in the Wisconsin pinery. It describes where the tales began, how they moved out of the forest and into print, and why publication changed them forever. Part bibliographic mystery and part social history, Out of the Northwoods explains for the first time why we all know and love Paul Bunyan.

"Through exhaustive research and sound reasoning Michael Edmonds makes a convincing case to move Bunyan's birthplace from New England or Canada to the logging camps of northern Wisconsin. In the process, he introduces readers to a largely unfamiliar, unsanitized, pre-print Bunyan known only to woodsmen of a bygone era. This is an important contribution to the study of folklore and, at the same time, something new and fun for the Bunyan fan in all of us." (Professor Kurt Kortenhof, Saint Paul College)