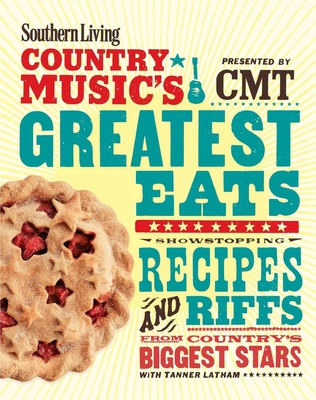 By The Editors of Southern Living
$24.95
Available at Warehouse

Over 30 of country music's brightest stars share their favorite food stories, told through a combination of fond recollections of great meals with family and friends, favorite memories and meals "from the road", sneak-peaks into their home kitchens, and over 75 of their own favorite recipes. Readers will be tapping their toes and humming along as they head to the kitchen to recreate these soon-to-be flavor favorites.

Inspired by the recipes drawn from the kitchens and food memories of some country music's greatest celebrities — from legends like Wynonna Judd and Hank Williams, Jr. to today's brightest stars, like Miranda Lambert and the Zac Brown Band and even the next generation of artists who are climbing the latest charts — this book celebrates the genre's greatest hits and irresistible flavors. Readers will truly have the sense of getting up close and personal with their favorite artists — and there's no better place to get to know someone than in their kitchen.

For over 40 years, Southern Living magazine has delivered definitive Southern food, decorating, gardening, and entertaining ideas to its readers, making it one of the most trusted sources in the country. It reaches more than 16 million readers monthly. Readers use it, keep it, live by it.

Writer Tanner Lathem spent 10 years as a Travel editor at Southern Living magazine. He covered the entire South and told the region's stories through its food, destinations, and characters. Since then, he has worked as a freelance writer and multimedia storyteller, contributing sound- and motion-rich stories to NPR, Southern Living, Coastal Living, Preservation, and Cooking With Paula Deen, among other outlets. Tanner is currently producing a podcast - The Authentic South -- that explores the culture of the South through food, art, music, the landscape, quirky characters and big personalities.

Spokesperson Allison DeMarcus - CMT personality and host of the network's Reel Eats, which combines select CMT movies and featured recipes prepared by Allison, as well as interviews with country's favorite stars, the latest Hollywood and country music news, and more. Allison has served as CMT's red carpet correspondent covering the AMA, CMA, ACM and CMT Music Awards and has appeared on numerous CMT programs since 2007. She is married to Jay DeMarcus of the CMA, ACM and CMT vocal group of the year, Rascal Flatts.