Fantastic Mr. Fox: The Making of the Motion Picture (Hardcover) 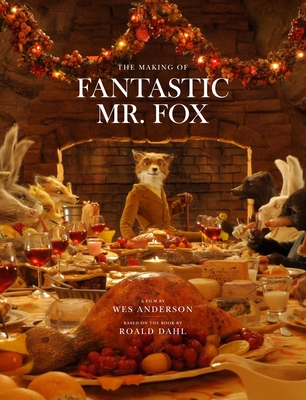 Originally published in 1970, Roald Dahl’s Fantastic Mr. Fox tells the story of the Fox Family. After twelve years, the Fox Family’s quiet home life proves too much for Mr. Fox’s natural animal instincts. When his young nephew arrives, Mr. Fox slips back into his old ways as a smart bird thief and, in doing so, endangers not only his beloved family, but the whole animal community as well. In Fall 2009, audiences will cheer as award-winning director Wes Anderson (Rushmore, The Royal Tenenbaums, The Darjeeling Limited) brings us his take on the tale: a blockbuster stop-motion animation film shot entirely in high definition. Starring the voice talents of George Clooney (Michael Clayton), Meryl Streep (Doubt), Bill Murray (Lost in Translation), and Jason Schwartzman (Marie Antoinette), the movie is sure to please fans of the original story as well as enchant new generations. Fantastic Mr. Fox: The Making of the Motion Picture is a family-friendly behind-the-scenes look at the creation of the film. Filled with photos, script pages, storyboards, and interviews with cast and crew, this book is a delightful and intriguing peek at the magic that happens as the filmmakers bring to life one of children’s literature’s most beloved characters: the outrageous, audacious, Fantastic Mr. Fox.

Oscar©-nominee Wes Anderson is the writer and director of such films as Bottle Rocket, Rushmore, The Royal Tenenbaums, and The Darjeeling Limited.

The official companion to the upcoming major motion picture based on the beloved classic by Roald Dahl.