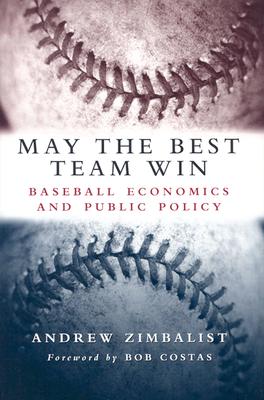 By Andrew Zimbalist
$38.99
Email or call for price.

The business of baseball stands in sharp contrast to the game's wholesome image as America's favorite pastime. Major league baseball is a deeply troubled industry, facing chronic problems that threaten its future: persistent labor tensions, competitive dominance by high-revenue teams, migration of game telecasts to cable, and escalating ticket prices. Amid the threat of contraction, existing franchises are demanding public subsidies for new stadiums, while viable host cities are begging for teams. The game's core base of fans is aging, and MLB is doing precious little to attract a younger audience. According to Andrew Zimbalist, these problems have a common cause: monopoly. Since 1922 MLB has benefited from a presumed exemption from the nation's antitrust laws. It is the only top-level professional baseball league in the country, and each of its teams is assigned an exclusive territory. Monopolies have market power, which they use to derive higher returns, misallocate resources, and take advantage of consumers. Major league baseball is no exception. In May the Best Team Win, Zimbalist provides a critical analysis of the baseball industry, focusing on the abuses and inefficiencies that have plagued the game since the 1990s, when franchise owners appointed their colleague Bud Selig as MLB's "independent" commissioner.

Andrew Zimbalist is Robert A. Woods Professor of Economics at Smith College. He has published fifteen books and has consulted for players associations, governmental bodies, cities, owners, corporations, and international development organizations. His books include "May the Best Team Win: Baseball Economics and Public Policy" (Brookings, 2003) and "In the Best Interests of Baseball? The Revolutionary Reign of Bud Selig "(Wiley, 2006). Bob Costas, a 19-time Emmy Award winner, and television's most honored studio host, is the host of NBC's "Football Night in America" studio show.