Belle Starr and Her Times: The Literature, the Facts, and the Legends (Paperback) 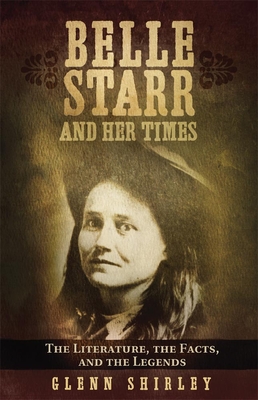 By Glenn Shirley
$21.95
Available at Warehouse

Who was Belle Starr? What was she that so many myths surround her? Born in Carthage, Missouri, in 1848, the daughter of a well-to-do hotel owner, she died forty-one years later, gunned down near her cabin in the Cherokee Nation in Oklahoma. After her death she was called "a bandit queen," "a female Jesse James," "the Petticoat Terror of the Plains." Fantastic legends proliferated about her. In this book Glenn Shirley sifts through those myths and unearths the facts. In a highly readable and informative style Shirley presents a complex and intriguing portrait. Belle Starr loved horses, music, the outdoors-and outlaws. Familiar with some of the worst bad men of her day, she was, however, convicted of no crime worse than horse thievery. Shirley also describes the historical context in which Belles Starr lived. After knowing the violence of the Civil War as a child in the Ozarks, She moves to Dallas in the 1860s and married a former Confederate guerilla who specialized in armed robbery. After he was killed, she found a home among renegade Cherokees in the Indian Territory, on her second husband's allotment. She traveled as far west as Los Angeles to escape the law and as far north as Detroit to go to jail. She married three times and had two children, whom she idolized and tormented. Ironically she was shot when she had decided to go straight, probably murdered by a neighbor who feared that she would turn him in to the police. This book will find a wide readership among western-history and outlaw buffs, folklorists, sociologists, and regional historians. Shirley's summary of the literature about Belle Starr is as interesting as the true story of Belle herself, who has become the West's best-known woman outlaw. Glenn Shirley, an authority on the Old West, has written many books and hundreds of articles for anthologies, journals, and magazines. He is the author of Temple Houston: Lawyer with a Gun; West of Hell's Fringe: Crime, Criminals, and the Federal Peace Officer in Oklahoma Territory, 1889-1907; and Shotgun for Hire: The Story of "Deacon" Jim Miller, Killer of Pat Garrett, all published by the University of Oklahoma Press.