Betraying Spinoza: The Renegade Jew Who Gave Us Modernity (Hardcover) 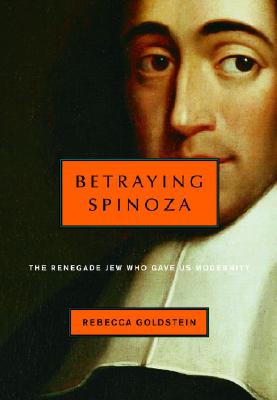 By Rebecca Goldstein
$22.00
Email or call for price.

Part of the Jewish Encounter series

In 1656, Amsterdam’s Jewish community excommunicated Baruch Spinoza, and, at the age of twenty–three, he became the most famous heretic in Judaism. He was already germinating a secularist challenge to religion that would be as radical as it was original. He went on to produce one of the most ambitious systems in the history of Western philosophy, so ahead of its time that scientists today, from string theorists to neurobiologists, count themselves among Spinoza’s progeny.

In Betraying Spinoza, Rebecca Goldstein sets out to rediscover the flesh-and-blood man often hidden beneath the veneer of rigorous rationality, and to crack the mystery of the breach between the philosopher and his Jewish past. Goldstein argues that the trauma of the Inquisition’ s persecution of its forced Jewish converts plays itself out in Spinoza’s philosophy. The excommunicated Spinoza, no less than his excommunicators, was responding to Europe’ s first experiment with racial anti-Semitism.

Here is a Spinoza both hauntingly emblematic and deeply human, both heretic and hero—a surprisingly contemporary figure ripe for our own uncertain age.

Rebecca Newberger Goldstein is the author of "Incompleteness: The Proof and Paradox of Kurt Godel" and of six works of fiction, including "The Mind-Body Problem, Mazel, " and "Properties of Light." A fellow of the American Academy of Arts and Sciences, she has received many awards for her fiction and scholarship, including a John D. and Catherine T. MacArthur Foundation Fellowship. She lives in Massachusetts.

“Beautifully crafted. What seem like separate issues—Spinoza’s pioneering advocacy of complete freedom of thought in religious matters; the turmoil in the Jewish community; the fateful events in Amsterdam in the closing years of Spinoza’s life; the philosophical developments of the seventeenth century; Spinoza’s idea of a philosophical religion utterly purged of all anthropomorphism, even to the extent of denying that God is a ‘person’ in any sense—come together as if by themselves (the sure sign of a fine artist!) to answer my puzzle: how to understand Spinoza the human being, a man for whom reason itself was a kind of salvation.”
—Hilary Putnam, New York Observer