The Monk and the Philosopher: A Father and Son Discuss the Meaning of Life (Paperback) 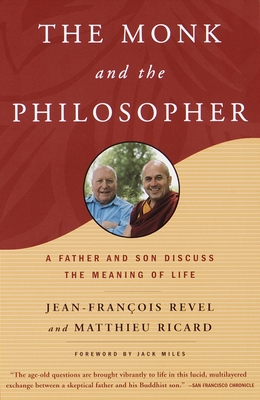 Jean Francois-Revel, a pillar of French intellectual life in our time, became world famous for his challenges to both Communism and Christianity. Twenty-seven years ago, his son, Matthieu Ricard, gave up a promising career as a scientist to study Tibetan Buddhism -- not as a detached observer but by immersing himself in its practice under the guidance of its greatest living masters.

Meeting in an inn overlooking Katmandu, these two profoundly thoughtful men explored the questions that have occupied humankind throughout its history. Does life have meaning? What is consciousness? Is man free? What is the value of scientific and material progress? Why is there suffering, war, and hatred? Their conversation is not merely abstract: they ask each other questions about ethics, rights, and responsibilities, about knowledge and belief, and they discuss frankly the differences in the way each has tried to make sense of his life.

Utterly absorbing, inspiring, and accessible, this remarkable dialogue engages East with West, ideas with life, and science with the humanities, providing wisdom on how to enrich the way we live our lives.

Jean-Francois Revel, a member of the Academie Francaise, was born in 1924. He studied and taught philosophy but abandoned university teaching to concentrate on writing. He was editor for many years of the influential political weekly L'Express. His books, including the best-seller Without Marx or Jesus and How Democracies Perish, have gained worldwide recognition.

Matthieu Ricard lives in the Shechen Monastery in Nepal. Born in France in 1946, he received his doctorate in molecular biology from the Institut Pasteur in Paris. In 1972 he decided to forsake his scientific career to better concentrate on his Buddhist studies, which he had begun years earlier. He has published Journey to Enlightenment, a book of photographs about his teacher, Dilgo Khyentse Rinpoche (one of the most eminent Tibetan masters of our times and a teacher to The Dalai Lama), as well as translations of many Buddhist texts. He often accompanies The Dalai Lama to France as his personal interpreter.

"The wonderful thing about this book is that it shows how fruitful open-hearted dialogue can be. Although these two men have pursued their humane concerns and their quest for knowledge by different means, I believe they both reveal that it's not so important whether life has meaning, but whether we give meaning to the life we live." -- His Holiness The Dalai Lama

"The Monk and the Philosopher is an intellectual banquet -- an enlightening and lively encounter that explores man-kind's most profound questions." -- Daniel Goleman, author of Emotional Intelligence