Still Foolin' 'Em: Where I've Been, Where I'm Going, and Where the Hell Are My Keys? (Hardcover) 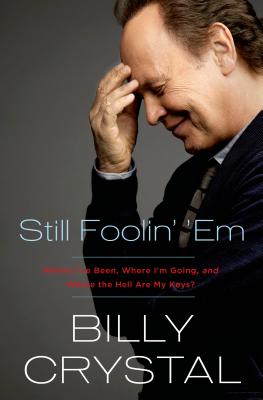 By Billy Crystal
Email or call for price
Out of Print

Hilarious and heartfelt observations on aging from one of America's favorite comedians as he turns 65, and a look back at a remarkable career

Billy Crystal is turning 65, and he's not happy about it. With his trademark wit and heart, he outlines the absurdities and challenges that come with growing old, from insomnia to memory loss to leaving dinners with half your meal on your shirt. In humorous chapters like "Buying the Plot" and "Nodding Off," Crystal not only catalogues his physical gripes, but offers a road map to his 77 million fellow baby boomers who are arriving at this milestone age with him. He also looks back at the most powerful and memorable moments of his long and storied life, from entertaining his relatives as a kid in Long Beach, Long Island, his years doing stand-up in the Village, up through his legendary stint at Saturday Night Live, When Harry Met Sally, and his long run as host of the Academy Awards. Readers get a front-row seat to his one-day career with the New York Yankees (he was the first player to ever "test positive for Maalox"), his love affair with Sophia Loren, and his enduring friendships with several of his idols, including Mickey Mantle and Muhammad Ali. He lends a light touch to more serious topics like religion ("the aging friends I know have turned to the Holy Trinity: Advil, bourbon, and Prozac"), grandparenting, and, of course, dentistry. As wise and poignant as they are funny, Crystal's reflections are an unforgettable look at an extraordinary life well lived.

Billy Crystal has starred in many hit films, among them When Harry Met Sally, City Slickers, The Princess Bride, and Analyze This. He is the author of the Tony award-winning play 700 Sundays, about his relationship with his late father, which was later adapted into a book, and the children’s book, I Already Know I Love You. Crystal was a cast member of Saturday Night Live, is a six time Emmy winner, and recipient of the Mark Twain Prize for American Humor. He has hosted the Academy Awards nine times. He lives in Los Angeles with his wife, Janice.

“Still Foolin' ‘Em … moves from one funny, strange and heartfelt moment to the next as smoothly as the best of the nine Academy Awards shows Crystal hosted.” —Los Angeles Times

“Crystal gets a lot of laughs out of the indignities of aging.” —USA Today

“Crystal has the charisma, humor, and down-home charm that fans have loved over the years . . . [He] delivers numerous chuckles and flat-out belly laughs . . . To quote one of his most famous characters, Billy Crystal, ‘you look mahvelous.'” —Associated Press

“A book with a thousand laughs entwined with unknown stories about some of the most popular movies of the past decades. Tender moments abound, too, as the reader winds his way through Billy's long varied career.” —Steve Martin

“This book is kick-ass funny and truly unique. A Hollywood autobiography with only one wife, no rehab, a loving family and loyal friends.” —Robin Williams

“Billy Crystal is a national treasure. Thank God he wrote this hilarious and emotional book because now I don't have to and I'll still have something personal to give everyone at Christmas.” —Bette Midler

“Avoiding the trappings--excess schmaltz, laundry list of famous friends, boozy party log--of so many celebrity memoirs, Crystal delivers a funny and genuinely moving chronicle of his life inside and outside Hollywood….(and) manages the extremely difficult feat of making his prose as vibrant and funny as his stand-up. He'll always be a hard act to follow.” —Publishers Weekly

“A charming, warm, welcome read for Crystal's legions of fans . . . the always affable author proves yet again his ability to translate his comedic chops from the screen to the page.” —Kirkus