When the Wolves Returned: Restoring Nature's Balance in Yellowstone (Hardcover) 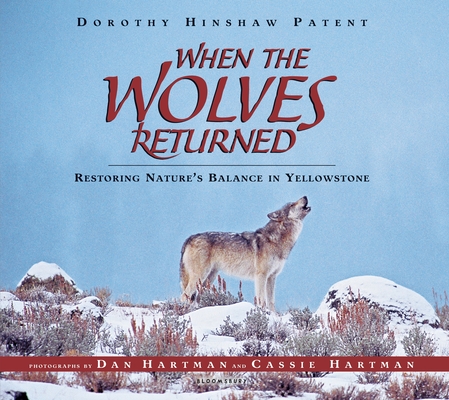 Yellowstone National Park's majestic geologic wonders and remarkable wildlife draw millions of visitors each year. But there was a time when these natural treasures were in great danger, all because after years of unrestricted hunting, one key piece of the puzzle had been eliminated-the wolf.
Now, more than a decade after scientists realized the wolves' essential role and returned them to Yellowstone, the park's natural balance is gradually being restored. The informative dual-level text and spectacular full-color photographs show the wolves in the natural habitat that was almost lost without them. Readers of all ages will be inspired by the delicate natural system that is Yellowstone.

Dorothy Hinshaw Patent has written more than a hundred books-mostly nonfiction and photo-essays for children-including The Right Dog for the Job, which earned a starred review from School Library Journal, and Flashy Fantastic Rain Forest Frogs. Dorothy lives in Montana with her husband. Visit her Web site at www.dorothyhinshawpatent.com.
Dan and Cassie Hartman, a father-daughter team, live on the northeast border of Yellowstone National Park and have photographed a variety of wildlife in their natural habitat. Sixteen-year-old Cassie had her first photograph published in Montana Outdoors magazine when she was only ten years old; Dan's work has been published in National Wildlife and National Geographic. The Hartmans have also operated their "Wildlife Along the Rockies" Gallery in Silver Gate, Montana, for the past seventeen years. Visit their Web site at www.wildlifealongtherockies.homestead.com.