Deaf in Japan: Signing and the Politics of Identity (Paperback) 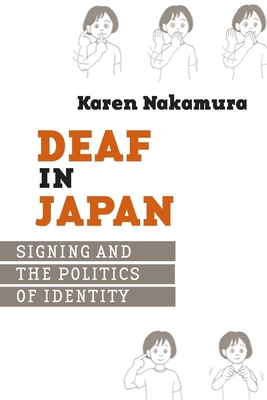 Until the mid-1970s, deaf people in Japan had few legal rights and little social recognition. Legally, they were classified as minors or mentally deficient, unable to obtain driver's licenses or sign contracts and wills. Many worked at menial tasks or were constantly unemployed, and schools for the deaf taught a difficult regimen of speechreading and oral speech methods rather than signing. After several decades of activism, deaf men and women are now largely accepted within mainstream Japanese society.

Deaf in Japan, a groundbreaking study of deaf identity, minority politics, and sign language, traces the history of the deaf community in Japan, from the establishment of the first schools for the deaf in the 1870s to the birth of deaf activist movements in the postwar period and current "culture wars" over signing and assimilation. Drawing on archival and ethnographic research and in-depth interviews with deaf men and women from three generations, Karen Nakamura examines shifting attitudes toward and within the deaf community.

Nakamura suggests that the notion of "deaf identity" is intimately linked with the Japanese view of modernization and Westernization. The left-affiliated Japanese Federation of the Deaf embraces an assimilationist position, promoting lip-reading and other forms of accommodation with mainstream society. In recent years, however, young disability advocates, exponents of an American-style radical separatism, have promoted the use of Japanese Sign Language.

Nakamura, who signs in both ASL and JSL, finds that deafness has social characteristics typical of both ethnic minority and disability status, comparing the changing deaf community with other Japanese minority groups such as the former Burakumin, the Okinawans, and zainichi Koreans. Her account of the language wars that have erupted around Japanese signing gives evidence of broader changes in attitudes regarding disability, identity, and culture in Japan.

Karen Nakamura is Assistant Professor of Anthropology and East Asian Studies at Yale University. She is coeditor of Many Ways to be Deaf: International Variation in Deaf Communities (Gallaudet University Press).